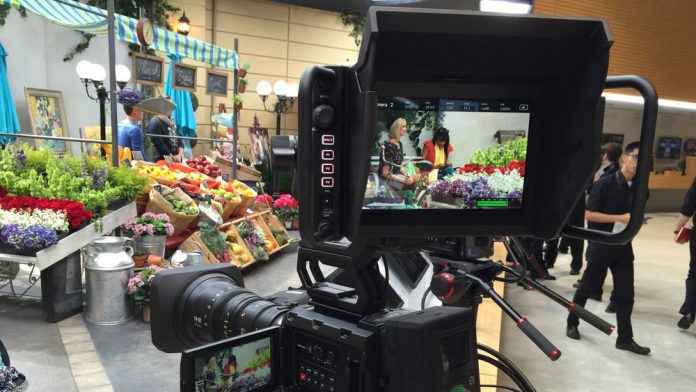 Blackmagic disappointed today when the company failed to bring out any new cameras at this year’s NAB, instead introducing products to complement their existing lineup. Among products announced at today’s press conference are a new Studio Viewfinder for the URSA, a new operating system and interface for the URSA Mini and a new Video Assist 4K. Also announced is the release of the DaVinci Resolve 12.5 Public Beta, along with a new Duplicator 4K and several new and updated broadcast tools.

The new URSA Studio Viewfinder features a 7” high resolution screen and an all metal design and an articulated arm with variable resistance at the mounting points. The Studio Viewfinder adds physical dial, knobs and three customizable function buttons to control brightness, contrast, and peaking without going into the menus.
When attached to URSA Mini, the camera sends information via the SDI connection to the viewfinder. The Viewfinder also includes a large RGB LED tally indicator and is compatible with Blackmagic Video Device Embedded Control Protocol for full control of camera functions such as talkback, tally, color correction, image detail, gains, all lens functions and more.

Along with this Blackmagic also announced a major redesign of the camera operating system for the URSA Mini. The new user interface offers dozens of new features and will be available later this year free of charge for all URSA Mini customers.
In an attempt to streamline the user experience — a common pain-point for URSA users — a new heads-up display reduces the number of menus and submenus needed to find specific settings, and settings such as ISO, white balance, shutter angle, iris, frame rate, frame guides are now accessible without navigating through menus.
Custom white balance and white balance presets, along with tint control settings, are now also available. There is also improved control over shutter angle and a new metadata entry page with predictive suggestions eases the collection of metadata on recording clips.
The new OS also adds 1.33x and 2x anamorphic de-squeeze previews, and shooters can now import and store external 3D LUTs and load and save their own presets for different shooting setups or operators.

The Video Assist 4K upgrades the previously released Blackmagic Video Assist. The Video Assist 4K features a 7-inch touch-screen monitor, two high speed recorders for non-stop HD and Ultra HD recording, two XLR microphone inputs, a built in speaker and more.
The Video Assist 4K can record two streams of Ultra HD video up to 2160p30 on SD cards, where files are saved as broadcast quality 10-bit 4:2:2 video in either ProRes or DNxHD formats. Recording can be triggered to start and stop using LANC or over HDMI or SDI from the camera.

Blackmagic Duplicator 4K allows for the duplication of up to 25 SD cards, with 25 recorders simultaneously recording onto multiple cards at once. It features realtime H.265 encoding technology and12G-SDI input and loop thru output, along with RS-422 control.
The device can record in all SD, HD and Ultra HD formats up to 2160p60 and can record unlimited cards by daisy-chaining multiple duplicators together. Imagine attending a live event and leaving with a recording stored on an SD card for later viewing.