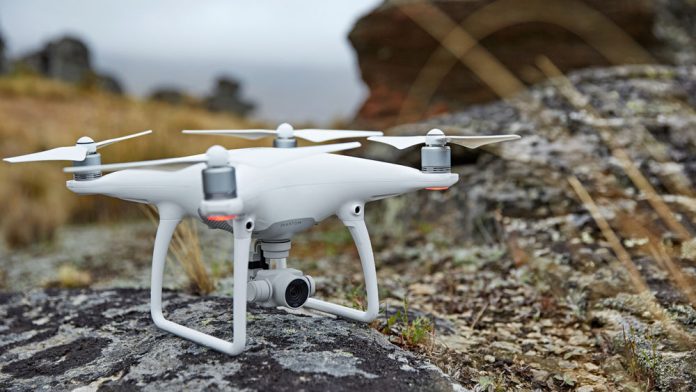 DJI has announced the Phantom 4, the next generation of its integrated drones for high-level aerial photography and cinematography, available soon for $1399.
The difficulty with using a drone for aerial photography is the complex juggling required to pilot it relative to a subject in motion. A drone camera operator must not only keep the aircraft flying on route, but also keep it moving relative to the subject — circling while also moving forward, for instance — and simultaneously keep the camera focused on the subject all while moving smoothly and keeping the subject composed cleanly in frame. Yeesh!
DJI's new Phantom 4 is designed to off-load complex piloting by using the same kinds of video processing and motion tracking that we've become used to from video editing software and working live in camcorders
First, with the Phantom 4, you no longer need to constantly monitor the flight path. The new Obstacle Sensing System uses a pair of forward-facing cameras to avoid collisions by detecting upcoming obstacles. The Phantom 4 will slow down as it nears an obstacle from a range of 0.7 to 15 meters and then automatically go around or over it, or hover in place. This means you can fly in messier environments, for example in a rock canyon or along a tree-lined path. Obstacle sensing also improves the Return Home feature, since the drone can avoid collisions as it finds its way back to you, even when out of view, to a distance of 2 to 3 miles from the controller.
http://youtu.be/crHFfpdSmSo
Then, instead of needing to constantly control the flight by tweaking the controller joysticks, you can instead use the new TapFly mode to just tap on the screen to have the Phantom 4 automatically fly in that direction, with clean and smooth motion.
And even better, you can use the ActiveTrack mode to automatically track a moving subject from a safe distance. There's no separate transmitter on your subject; just tap to select the subject on screen in the DJI GO app, and the Phantom 4 uses video object-tracking technology to keep them in frame as they move.
You also can hit the Pause button at any point to have the Phantom stop flying and hover in place.[image:blog_post:59748]
The design of the Phantom 4 has also been improved to make it stronger with a magnesium core, more aerodynamic and more rugged. The new Push-and-Release propellers install faster and can handle faster acceleration and harder braking. The gimbal and camera system is integrated into the body, bringing it closer to the drone's center of gravity. Combined with the new motors and battery, the Phantom 4 now can provide up to 28 minutes of flight time. In addition, the Vision Positioning System has four sensors and an improved sonar system so it now functions up to 10 meters off the ground.[image:blog_post:59746]
The improved design provides a new Sport mode, allowing faster speeds up to a zippy 44 mph — that's 20 meters/sec — with 6 m/s ascend speed and 4 m/s descend speed. Besides being more fun to fly, Sports mode also allows you to get on location and in position faster to get the shot.
http://youtu.be/dY8KIMQRTf0
For videographers, the camera has been upgraded to reduce chromatic aberration by 56% and lens distortion by 36% compared to Phantom 3 Professional. Plus there's a new 120 fps video mode that shoots in full 1080p HD for smooth slow motion, added to the wide range of available formats and frame rates from HD to 4K UHD.[image:blog_post:59747]
The Phantom 4 is available now for pre-order from DJI and, interestingly, from Apple. Shipping starts March 15, with product exclusively available in Apple Stores through the end of March.
Meanwhile, the base previous-generation Phantom 3 Standard for beginner pilots is now only $499, and the Phantom 3 Advanced and Professional are $799 and $999 respectively, with high-def and 4K video, vision positioning (without GPS), and extended ranges. Visit www.dji.com for more details.