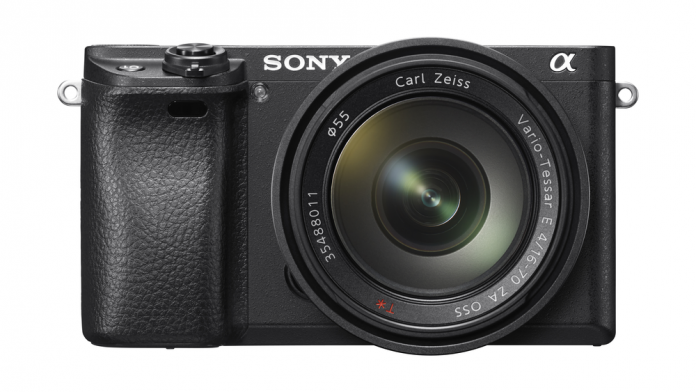 Today in New York City, Videomaker saw the introduction of Sony’s new a6300 — with what they claim is the world’s fastest autofocus. A mirrorless camera with a 24.2 MP APS-C sensor, the Sony a6300 shoots 4K video internally and boasts the ability to lock focus in just 0.05 seconds with its 425 phase detection AF points. To Boot, the a6300 has an ISO range of 100 – 51200.[image:blog_post:59418]
When asked about the a6300, Vice President of Digital Imaging Neal Manowitz said “With this new model, we’ve combined the world’s fastest and most extensive AF system with a superb image sensor and many of our most advanced imaging and video technologies, creating a package that can far exceed the performance of any DSLR in its class. This camera connects you with the action like never before.”
Sony emphasized that the a6300 AF system works not only with the FE lenses but also their A-mount lenses, as well, using their LA-EA3 adaptor. This function isn’t new to the Alpha line but is now available at a far lower price point.
The a6300 records 4K internally in the Super 35mm format. When shooting 4K, the camera uses full pixel readout without pixel binning to collect 20 megapixels of information. That’s about the equivalent of 6K resolution. [image:blog_post:59426]
When shooting with the XAVC S codec, the a6300 offers 100 Mbps when recording 4K and 50 Mbps in Full HD. The a6300 even boasts 120 fps in HD at 100 Mbps, with the ability for the footage to be reviewed at 5x slow motion converting it to 24p. Touting 14-stops of dynamic range in S-Log3, the camera also supports S-Gamut for a wider color space.  [image:blog_post:59425]
Another great video option the a6300 offers is a microphone input and support for XLR input when using a Sony XLR adapter kit. Plus, it offers zebras and time code.[image:blog_post:59427]
The camera will be available in March for about a $1,000 for body only and for around $1,150 when bought in a kit with the 16-50mm f/3.5 – f/5.6 lens.
[image:blog_post:59428]Also unveiled at the press conference was a new line of Sony FE lenses called G Master. The line includes 3 new lenses: a 24-70mm f/2.8 going for $2,200 available in March, an 85mm f/1.4 going for $1,800 also available in March, and lastly a 70-200mm f/2.8 with its price to be determined but said to be available by May.