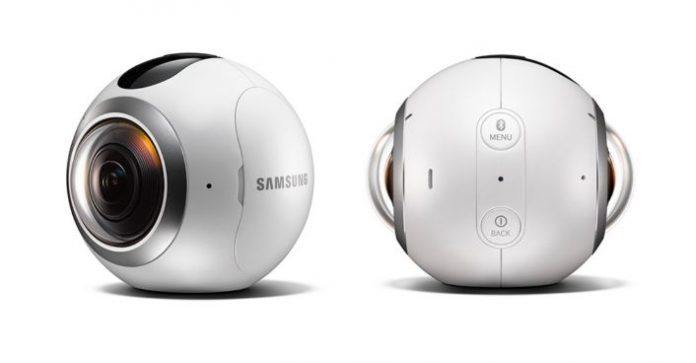 Samsung announced Saturday their new Gear 360 camera, which rounds out their ecosystem of VR and 360-degree video offerings. This marks the first instance of a company with plans for offering the entire suite of VR products — phone, headset and camera. While light on details, Samsung's plan smells Apple-esque. They've been asked, but have not answered the question of whether or not the camera will be compatible with non-Samsung phones and tablets. Ingesting and editing footage can only currently be done using a Samsung phone, currently limited to the Galaxy S7 and Galaxy S7 edge, Galaxy S6 edge+, Galaxy Note 5, Galaxy S6 edge and Galaxy S6.

Those that have seen footage from the Samsung Gear 360 were impressed by its quality. The Verge reports that the footage looks as good or better than footage from Ricoh's Theta S, but not as as good as the yet to be released Nikon KeyMission or upcoming GoPro 360 camera. It also can't compare to professional cameras like NextVR or Jaunt.

The Gear 360 will shoot 3840 x 1920 30fps video — just shy of UHD — using two f/2.0 lenses with 195-degree fields of view each. It will also shoot 30MP stills. Unlike some of its competition, Gear 360 features a removable battery and microSD card slot.  Samsung has chosen once again to use h.265 (MP4), which will make working with the files difficult until the format is more widely adopted.

The industry is on the verge of being flooded with 360-degree cameras. If you count unreleased cameras, we currently have participation from Fly360, Kodak, Ricoh, Nikon, GoPro, LG and Samsung. We expect an announcement from Sony soon.

A price for the Gear 360 hasn't yet been announced, but it should go on sale between April and June 2016.