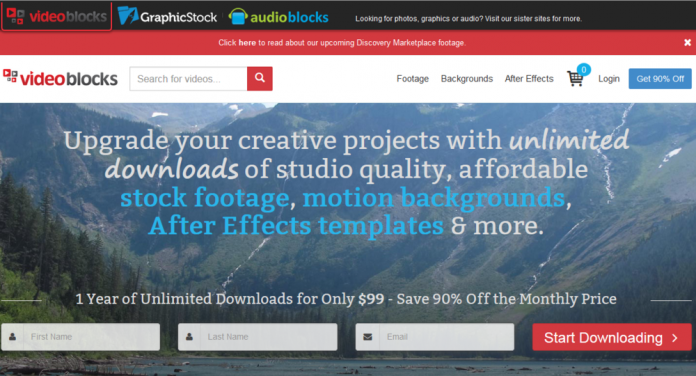 VideoBlocks, the subscription-based provider of stock video, has announced that it will add over 30,000 film clips from the Discovery Channel’s professionally shot royalty-free video library to its Marketplace in early 2016.

VideoBlocks is a members-only stock video website where membership includes unlimited access to an archive of over 115,000 high definition videos, After Effects templates and motion backgrounds. Members can purchase clips from the VideoBlocks Marketplace at prices which the company claims save an average of 40% compared to competitive sites.

The company’s agreement with Discovery Channel allows VideoBlocks’ subscribers to access high quality video content ranging from shots of volcanic eruptions and aerial footage looking straight into the eye of a hurricane to rare glimpses of endangered wildlife in its natural habitat.

The Discovery Channel video clips are captured using state-of-the-art equipment at a cost that has previously meant use of the stock footage has been beyond the reach of budget conscious video editors. However by making the shots available through the VideoBlocks Marketplace the members will be able to use the material royalty-free for personal and/or commercial use, without distribution restrictions.

“Discovery Channel has captured the breathtaking beauty of our planet in ways that no others have, and including this content in our Marketplace is game-changing for video editors,” said Joel Holland, Founder and CEO of VideoBlocks. “This addition furthers our mission to provide premium creative content that everyone can afford, and we are honored that Discovery entrusted VideoBlocks to distribute their powerful content.”

With more than 35 million videos downloaded to date, and more than 1 million new downloads every month, VideoBlocks’ stated commitment is to deliver the highest quality content to creators of all capacities and budgets, all in one place.

“There is always an abundance of great video footage that doesn’t make the final cut, and now the unused content has a home,” said Greta Pittard, Head of Content Acquisition and Contributor Engagement for VideoBlocks. “This partnership will bring a robust library of Discovery Access’ exhilarating content found on Discovery Communications’ family of networks to new audiences.”