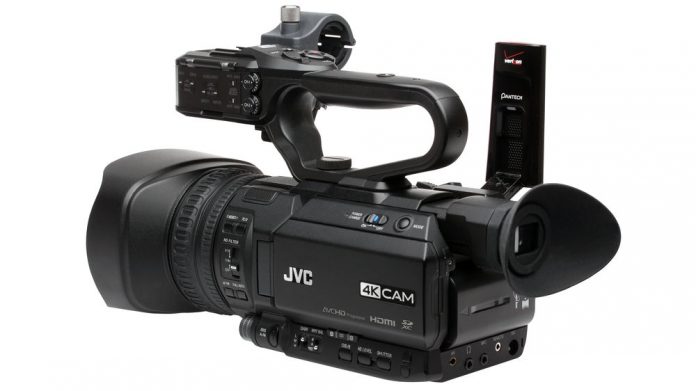 Following their recently announced partnership with XOS Digital and the launch of the GY-HM650SC ProHD camera, JVC Professional Video has announced another new professional video camera with specialized features aimed at those involved with sports.
The JVC GY-HM200SP 4KCAM camcorder produces a real-time score overlay on recorded or streamed video output without requiring the use of an external CG and production switcher designed to enhance single-camera local sports coverage. The camera can receive score information directly from a mobile device connected wirelessly to the camera using an intuitive GUI. It will also be possible for the camera to interface directly to a sports venue’s own scoreboard controller through a wired or wireless interface. The camera includes basic layouts to cover a wide variety of sports, but JVC will also be able to customize the overlay with the names and logos of teams.
“Not every school has access to a multi-camera mobile production system with a dedicated CG for covering all their sporting events,” explained Ian Scott, vice president, Professional Video Division. “The new GY-HM200SP makes it easy for one person to shoot the game, insert graphics, record, and stream the production live — all directly from the camera. For schools with limited equipment and personnel resources, this new camera provides an innovative and affordable solution for producing professional-quality, single-camera sports coverage.”
[image:blog_post:58864]
Beyond its built-in graphics overlay, the GY-HM200SP includes all the professional features of the GY-HM200 camcorder. It has a 1/2.3-inch BSI CMOS imager and integrated 12x zoom lens with optical image stabilizer and 24x dynamic zoom in HD mode. The camera records 4K Ultra HD, 4:2:2 Full HD (50 Mbps) and SD footage. In addition a new 70 Mbps mode records 4K footage in smaller, more manageable files on economical Class 10 SDHC/SDXC memory cards.
The built-in HD streaming engine with Wi-Fi and 4G LTE connectivity allows live HD transmission directly from the GY-HM200SP to the JVC’s own ProHD Broadcaster server powered by Zixi as well as the Wowza Streaming Engine, other hardware decoders and content delivery networks like Ustream and YouTube.
Other features of the GY-HM200SP include dual XLR audio inputs with built-in phantom power that are mic/line switchable, an integrated handle with hot shoe and dedicated microphone mount, and SDI and HDMI video outputs.
With an MSRP of $2,795, the GY-HM200SP will ship in January 2016.
For more details go to pro.jvc.com