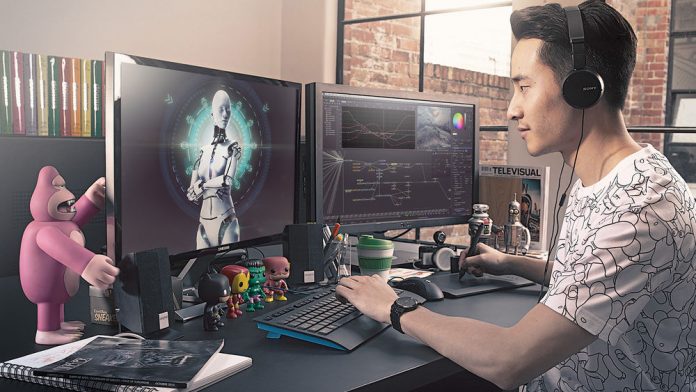 Blackmagic Design has announced that the public beta of Fusion 8 Studio for both Mac OS X and Windows is now available for download from the company’s website.
The Fusion 8 Studio public beta builds upon the free Fusion 8 version of the program released earlier this year and adds advanced tools for retiming, image repair, color smoothing and morphing between different images. The Fusion 8 Studio public beta also adds stereoscopic tools for converting 2D shows to 3D along with the ability to render at resolutions larger than Ultra HD.
Projects created with the free version of Fusion can be opened and finished in Fusion 8 Studio regardless of which platform they were created on. In addition Fusion 8 Studio public beta includes render node software that enables customers to install Fusion render nodes on additional computers for free, which means that large multi-user studios can accelerate their workflow by distributing render jobs across an unlimited number of systems on their network.
“The response to Fusion 8 has been overwhelming! Now, with the public beta of Fusion 8 Studio, customers have even more tools to work on the highest end feature films, TV shows and commercials,” said Grant Petty, Blackmagic Design CEO.
Fusion has been used on feature film and television projects including "The Martian," "Thor," "The Hunger Games" trilogy, "Grimm" and "Battlestar Galactica." The program features a node based interface to build sophisticated visual effects compositions and includes hundreds of built in tools to pull keys, track objects, rotoscope, retouch images, animate titles and create particle effects in a 3D workspace.
The Fusion 8 Studio public beta is available for Mac and Windows for $995. A Linux version will be released in Q1 2016.
[image:blog_post:59016]
Blackmagic Design has also announced that DaVinci Resolve 12 Studio, the full version of its professional editing and color correction software, is available in a Mac only version from the App Store for Mac OS X for only $499. Software downloaded from the App Store features built in security and does not require a hardware dongle to run which means that customers can run it on multiple personal Macs, like their laptop and desktop computers, simply by using their Apple ID.
Customers who need to switch between Mac and Windows, or who are using DaVinci Resolve in a facility that does not use Apple ID, can still purchase DaVinci Resolve 12 Studio with a hardware dongle from Blackmagic Design resellers.
Read our review of Blackmagic's DaVinci Resolve 12 here.
For more information go to www.blackmagicdesign.com.