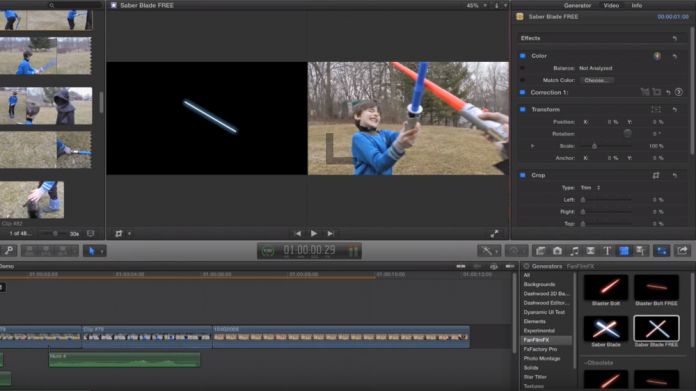 Those waiting to see what kind of effects will be found in "Star Wars: The Force Awakens" will have to wait until they’re seated in the theaters and the movie starts. But for those looking to create their own "Star Wars" effects, FanFilmFX has created a series of "Star Wars" inspired plug-ins for use in Apple's Final Cut Pro X 10.2.2, Adobe After Effects CC, Premiere Pro CC, and Apple Motion 5.1 on a Macintosh computer. The two developers (and fans of Star Wars) are Alex (age 13) and Ben (11), both sons of Tim Dashwood, the founder of 11 Motion Pictures Limited and its sister companies, Dashwood Cinema Solutions and the Toronto-based stereoscopic 3D production company Stereo3D Unlimited Inc.
The first of the three plug-ins is Saber Blade. It enables keyframe and rotoscope lightsaber effects to be placed onto your fan video Jedi battles. Both free and commercial versions are available, with the paid version allowing for adjustment of the width of each end of the blade for motion blur and perspective effects, among others. Blaster Bolt allows for the animation of laser bolt effects. Also found in free and commercial versions, the paid version can adjust the width of each end of the bolt, change colors and add motion blur, among other effects. The final plug-in, Space Wipes provides for emulation of most of the scene transition effects from "Star Wars."
The plug-ins are deployed by FxFactory, which works like Apple’s App Store but is only for plug-ins. Once downloaded and launched, it’s used to select and download the plug-ins. They can be tested for free, although there will be watermarking. Additionally, basic video tutorials are available for each plug-in at the company’s website, with additional tutorials promised for the future.
http://youtu.be/W9C5LlGG1vE
The commercial plug-ins retail for $19.00, with Saber Blade and Blaster Bolt both featured at only $7 through December 18th. FanFilmFX has plans further Star Wars-inspired plug-ins as well as those of other iconic films such as "Star Trek," "The Matrix" and "Harry Potter," among others. Check out FanFilmFX at fanfilmfx.com