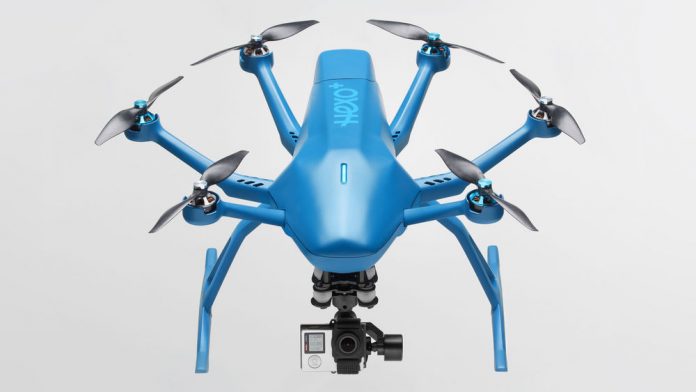 Following a successful Kickstarter campaign in 2014 Squadrone System has launched the HEXO+ which the company claims is the world’s first autonomous drone.
The HEXO+ drone can take off, follow and frame its user while filming with predetermined camera movements before landing safely. The flight and filming processes are automated and initiated through the HEXO+ smartphone application, enabling users to capture their footage hands-free without the need for a remote control.
“This is an entirely new way of capturing amazing aerial imagery,” says Antoine Level, cofounder and CEO of HEXO+. “We are incredibly proud to bring together our experience in aeronautics technology and software development to create a simple, easy to use product.”
[image:blog_post:58690]
HEXO+ combines a fast and responsive flight system with proprietary framing and tracking algorithms, and the company says that the library of 12 preprogrammed camera movements enables both novice and advanced users to create professional grade imagery using HEXO+ and a GoPro camera. The HEXO+ drone has an operating altitude of up to 16,000 feet with a maximum speed of 45mph and a 6 propeller design for added stability and power.
“HEXO+ was built with outdoor adventurers in mind, allowing them to live in the moment and not behind a lens,” says professional snowboarder and HEXO+ cofounder Xavier de Le Rue. “It enables you to capture incredible footage of yourself—by yourself. As a snowboarder, this gives me unprecedented freedom to create and share footage without the expense and constraints of helicopters and a film crew.”
The seven cofounders of the company behind HEXO+ have backgrounds in aeronautics, cinematography, software development and action sports. The Kickstarter campaign to fund the development of the drone was launched in June 2014 and reached its funding target of $50,000 in just 37 minutes before going on to raise $1,306,921 from more than 2,000 backers.
Check out what beta-tester iLAMO accomplished with his HEXO+ in the video below:
HEXO+ is available in the United States and abroad with complete certifications from the Federal Communications Commission (FCC), Conformité Européenne (CE) and Industry Canada (IC) .
The HEXO+ costs $1,349. For more details go to www.hexoplus.com