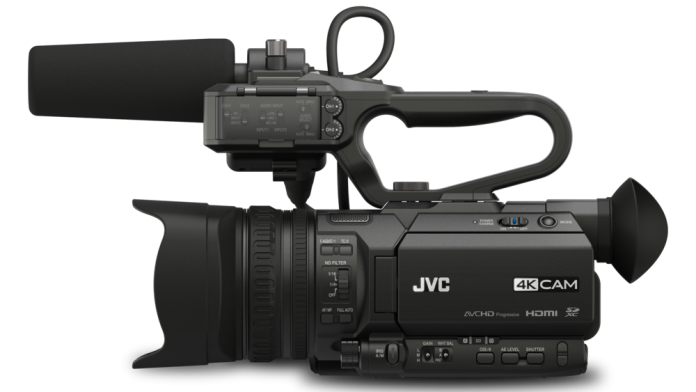 JVC is bringing a wealth of new features to the GY-HM200 and GM-HM170 4KCAM recorders, both of which have seen recent price cuts with the GY-HM200 being lowered in price through a $500 instant rebate that changes its retail to $2,495, and the GY-HM170 now retailing at $1,995. Both fixed lens models will be gaining a new slow motion recording mode that will allow for 120 fps to be shot in HD resolution. [image:blog_post:58586]This provides more creative options to videographers on top of the earlier update in September update to firmware version 2.0, which added 4K recording at 70Mbps, a histogram function, a HDI-SDI/HDMI Rec trigger, Zixi adaptive bitrate streaming, and a FTP resume function. The latest firmware update (firmware version 3.0) will be available in December and will be a free upgrade.
A recent update has also gone into effect for JVC’s GY-LS300 4KCAM handheld Super 35 camcorder. The version 2.0 firmware additions include a “JVC Log” mode that closely mimics the look of film and provides for a wide latitude and high dynamic range of up to 800 percent. The histogram display provides for checking the exposure through the viewing of the brightness distribution of the image and will be accessed through a user button, with the ability to set the range for top and bottom limits. New Cinema 4K and Cinema 2K modes provide for a 17:9 aspect ratio and resolutions of 4096 x 2160 (Cinema 4K) and 2048 x 1080 (Cinema 2K). [image:blog_post:58587]
Also being added is a Prime Zoom feature utilizing JVC’s Variable Scan Mapping technology: the ability to electronically adapt the active area of the camera’s image sensor for native support of various lenses when paired with third-party lens adapters. In use with a Micro Four Thirds prime lens, image adjustments can be made between the maximum scan area and a minimum scan area through the camera’s zoom rocker. This enables the camera to provide or a 2.3x maximum zoom for HD or 1.25x maximum zoom for 4K. The Prime feature is also usable as a lens extender for zoom lenses. The 2.0 firmware update is available now.