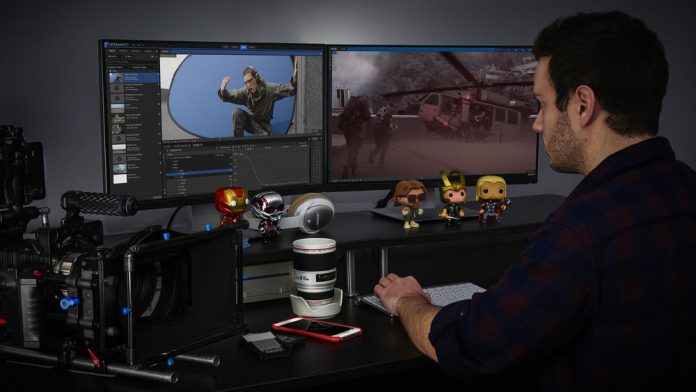 England-based tech company FXHOME have released a new version of its HitFilm editing and effects software. HitFilm 4 Pro combines the dynamic editing tools of a non-linear editing system with a visual effects suite that includes particle engines, grading and a true 3D compositing environment.
HitFilm 4 Pro's editing timeline gives access to all the tools users need including slip, slice, ripple & roll edits, audio meters, keyframing and a new Trimmer window for fine control. The software supports unlimited video and audio tracks in resolutions up to 4K with GPU acceleration and a preview and proxy system to help boost performance.
HitFilm 4 Pro comes with a library of over 200 customizable effects and incorporates powerful particle engines to generate visual elements including lightswords, fire and lightning, clouds, muzzle flashes and blood spray. The particle engines can also be used with 3D textures to create effects such as fleets of vehicles and swarms of creatures.
[image:blog_post:58673]
As well as a broadcast quality chromakeyer, HitFilm 4 Pro incorporates 2D and true 3D compositing which enables a user to composite 3D models into live action video or put a video layer inside a 3D model.
Color grading within HitFilm 4 Pro enables users to apply a LUT (Look Up Table) for quick results but also includes over 30 tools such as curves and color wheels for more precise control. Image quality can be further enhanced with flares, lighting effects and noise removal.
In addition HitFilm 4 Pro comes with HitFilm Ignite, a new collection of over 140 plug-ins for use in third party software, mocha HitFilm for mask tracking and 3D camera solving and the BorisFX 3D Objects titling plug-in.
HitFilm 4 Pro costs $349 with discounts available for those upgrading from the previous version. There is also a fully functional free trial of the software which is limited to exports up to 30 seconds long at SD quality.
For more information go to hitfilm.com/pro
You can read the Videomaker review of HitFilm 3 Pro from February 2015 here.