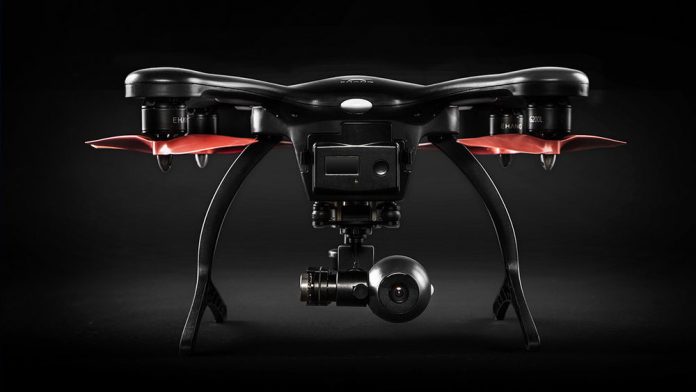 Unmanned aerial vehicle manufacturer EHang have released the newest version of its popular drone, the Ghost 2.0.
The Ghost 2.0 offers several new features, including a proprietary Tilt Control that enables users to steer the drone with their phone instead of complex RCA controls or “point and tap” app navigation. The app is available for both Apple and Android devices and enables the angle of the drone pilot’s phone to control the actions of the Ghost drone — when the user tilts their hand the drone will follow the gesture.
EHang’s Virtual Reality Goggles enable users to see through the Ghost 2.0’s camera to experience First Person View flight.  Aerial footage can be live streamed from the drone to the VR goggles from up to 3000 feet away with the company claiming zero latency for a real-time flying experience. In addition, the VR goggles have built-in motion sensors so that when the wearer turns their head, the drone’s camera turns as well.
[image:blog_post:58472]
“With our first two iterations of the Ghost Drone, we were able to build a strong foundation of both engineering and fans to help shape our vision for the Ghost 2.0,” said Derrick Xiong, co-founder and CMO of EHang. “Our mission from the beginning has been to bring drones to everyone, and this brings us closer to that reality. With the combination of avatar tilt mode and EHang Virtual Reality Goggles, even amateurs can master advanced aerial filming techniques.”
The Ghost 2.0’s app also allows a user to act as both pilot and camera operator, controlling the drone and its camera gimbal simultaneously from their phone.
EHang have designed the Ghost 2.0 with safety and durability in mind, but consumers will be reassured by the company’s full-year replacement policy so that, when accidents happen, they will be back in the air as quickly as possible.
The Ghost 2.0 will initially be sold on the EHang site, available for pre-order on Amazon and will soon be made available through Fry’s and Hobbico stores. The company are offering a $100 discount to the first 100 customers to buy the new version and will also roll out a trade-up program for owners of the first Ghost drone.
For more information, visit www.Ehang.com.