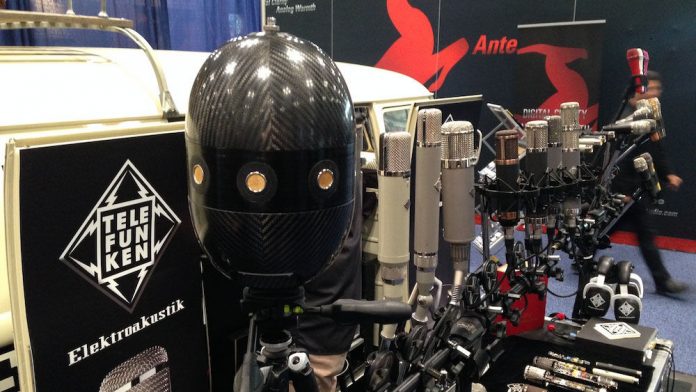 Virtual reality is all about being overwhelmed visually — there are no “blind spots” when you’re looking around. But until now audio hasn’t been able to keep up — sure there can be a 5.1 or 7.1 or greater audio streams but that doesn’t mean it’s as immersive as what is being seen because the sound isn’t coming from all around you.
Dysonics comes to the rescue with their 8 capsule, 360-degree microphone array. At the 139th annual AES convention in New York, the first ever VR demos combining 360-degree motion-tracked audio with 360-degree video were presented using the Samsung Gear virtual reality platform.
At the core is the RondoMic, a patented microphone array housing a series of eight custom designed omni-directional TELEFUNKEN M60 FET microphones. Their job: to capture the sound in an environment from all directions (i.e., 360-degrees). According to Dysonics, the RondoMic can pick up a room’s acoustics with extreme accuracy.
Give it a listen in this video — headphones definitely reccomended.
The TK61 capsule features a 6-micron goldsputtered 15mm membrane, and the M60 FET amplifier, in conjunction with the use of a proprietary circuit topology, produces an exceptional transient response and SPL handling capabilities. The Class A discrete amplifier has a frequency response of +/- 2dB from 20 Hz to 50 kHz. Output is matched via a custom made American transformer possessing low self-noise and a typical THD+N of 0.015% — or better.
The eight audio recordings are stitched together in real time through the use of proprietary spatial and motion tracking software, so as to reproduce the acoustics of the original source. This provides a sound reproduction free of simulation or post-processing, wherein the listener hears sounds move relative to head movements in a full 360-degree arc (Dysonics likes to call this Panoramic Sound).
Price and availability has yet to be set.