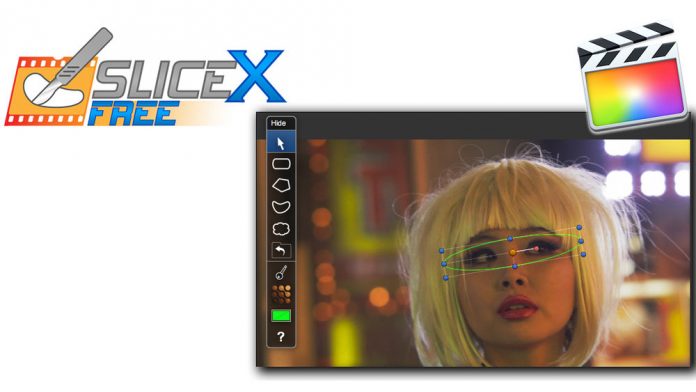 Australia-based software developer CoreMelt has announced the release of a free version of its award winning SliceX powered by mocha plug in for Final Cut Pro X.
SliceX enables users to create instant Shape Masks to cut out layers or isolate effects directly in Final Cut Pro X without having to go into Motion or create the masks with an external program. Users can simply draw a shape and set it to track with the option to adjust the motion using manual keyframes as needed.
SliceX Free is available to all Final Cut Pro X users with no purchase necessary. Once they have completed an automated online form, users will receive a permanent license to enable the use of mocha tracking, which is limited to oval and rectangle shapes, in their projects.
Although SliceX Free has just a small amount of the power of the full SliceX product, CoreMelt claims the free version of the plug-in still enables users to perform a lot of common useful tasks such as blurring a vehicle’s license plate or person’s face to obscure it and removing unwanted objects from a frame by cloning other areas of the image. Other suggested uses for SliceX Free are color correcting a tracked oval section such as a face and tracking a glow to an actor’s eyes.
CoreMelt’s founder, director and lead product designer Roger Bolton, a visual effects veteran whose credits include "Lord of the Rings," "Kingdom of Heaven" and "Charlie and the Chocolate Factory," said, “We believe that every single editor should have the power of SliceX available, so now they do, have one on us!”
SliceX Free requires an Apple OS X computer running 10.8 or later and a copy of Final Cut Pro X 10.1.4 or later.
For more details on SliceX Free go to www.coremelt.com/free