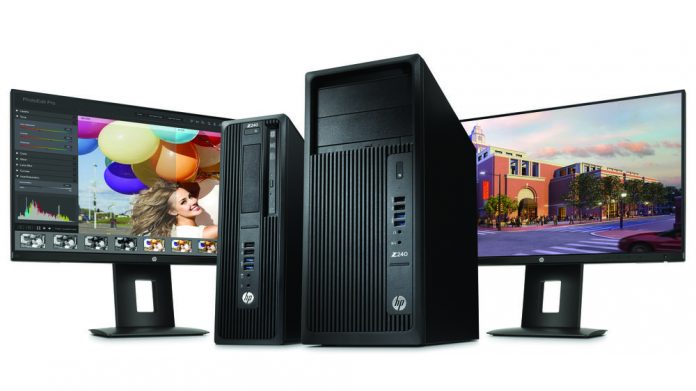 Last week, HP announced the HP Z240 Tower and Z240 SFF Workstations which are designed to meet the needs of users who require the reliability of a workstation at the price point of a desktop PC. The Z240 is the latest update to the world’s no. 1 ranked entry-level workstation, the HP Z230. With a next generation Intel® processor and HP Z Turbo Drive option the Z240 is ideal for customers in the video editing, MCAD/AEC and image viewing industries.
The HP Z240 Tower and Z240 SFF offer a choice of future Intel® Xeon® processor E3-1200 v5 product families, Intel® Core™, or Intel® Pentium™ processors and two ultrafast HP Z Turbo Drive G2. The HP Z Turbo drive is a solid state drive (SSD) connected via the PCIe interface. As such it is not constrained by the 6Gb/s bandwidth limits of the SATA bus and therefore can perform at greater speeds than a standard SATA SSD.
The Z240 features up to 64 GB DDR4 ECC memory — a 100 percent increase in memory capacity compared to previous generations — for enhanced performance and expandability. The workstations can be purchased with a choice of Windows 7, Windows 10 or Linux® operating systems.
The HP Z240 offers more performance, greater storage capacity, more IO and greater flexibility than the previous generations while retaining the same form factor. The HP Z240 SFF (small form factor) model is 57 percent smaller than the tower to conserve space while maintaining workstation performance.
In addition, HP have integrated a number of new innovations on both Z240 workstations including an integrated M.2 expansion to add an additional HP Z Turbo Drive or devices like Thunderbolt™. Other new features include dust filters, a simplified internal cable design along with improved air flow and cooling systems.
The HP Z240 SFF and HP Z240 should be available in November with estimated U.S. pricing starting at $879 for either workstation.
Here's a first look at last week's launch event in NYC from Joe Herman Reviews: