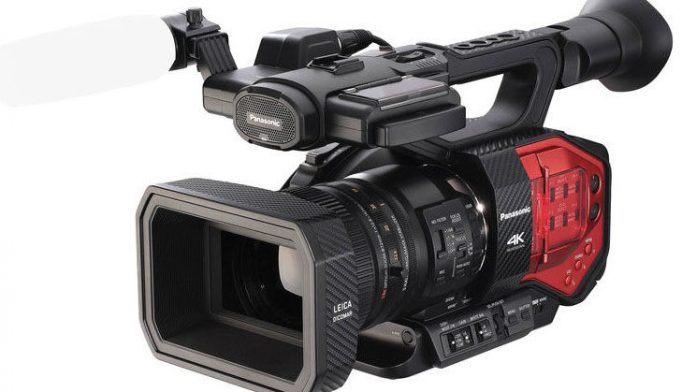 Last week, Panasonic announced on their blog that the first shipments of Panasonic DVX200's left the factory in Okayama at the end of last month. Priced at $4,195, it breaks the sub-$5000 price barrier while providing a host of professional features.
There is an integrated 13X zoom LEICA DICOMAR lens (equivalent to a 29.5-384.9mm lens of a 35mm camera when shooting DCI 4K) with a front element lens/filter diameter of 72mm. Three individual control rings are built into the lens for handling focus, zoom and the iris. There is also a power zoom rocker control. Ports include Timecode In/Out, a 3G-SDI for HD video and an HDMI 2.0 connector for 4K output. Battery has been positioned to the rear so as to avoid interference with handheld shooting.
The AG-DVX200 employs a Four-Thirds sensor and a five-axis Hybrid Image Stabilizer, with a micro-drive focus unit improving on its focus speed, tracking and capture abilities. The 4K resolution can capture up to 12 stops of dynamic range using Panasonic’s V-Log L gamma curve. There is support for DCI 4K production at 24 fps (frames per second), UHD 4K at up to 60 fps as well as HD at up to 120 fps. The DVX200 is optimized for 4K/UHD production, sharing the VariCam family characteristics of filmic tonality and colorimetry.
4K footage is recorded to MP4 or MOV formats, with 4K (4096 × 2160) / 24p and UHD (3840 × 2160). AVCHID 1920 x 1080 AVCHID video recording is also available at HD (1920 × 1080) 60p / 50p / 30p / 25p / 24p. There are dual SD memory card storage slots for U3 speed class SD cards, allowing for recording in Relay mode (swapping a full card out for an empty card), Backup mode (recording continuously on one card) and Simultaneous mode for recording the same content on both cards at the same time.
While the DVX200 is still in pre-order, it is set to ship to end users early this month.