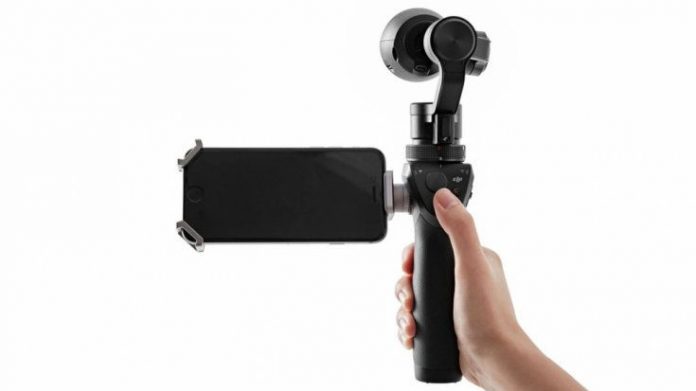 DJI today announced the release of the Osmo, a 4K camera mounted onto a handheld 3-axis stabilized gimbal and capable of producing super-steady, cinematic-quality video. With easy-to-use functionality and a 12 megapixel still camera, the Osmo also significantly simplifies the production of timelapses, hyperlapses and automated panoramas.
Osmo is fitted with DJI’s Zenmuse 3-axis gimbal stabilizers, providing the platform to produce silky-smooth video. Combined with Osmo’s spherical 4K camera — capable of up to 120 fps in full HD — it is a formidable filmmaking device.
“DJI’s smooth track technology anticipates how you want the camera to move and adapts to the most subtle movement“ explained Paul Pan, Lead Engineer at DJI.
Adding extra flexibility, Osmo’s camera is very similar to — and interchangeable with — the camera from DJI’s Inspire 1 drone.
As is standard with DJI’s cameras, the Osmo must be used with a smartphone via the DJI GO app — available on Android and iOS — to display footage and control the camera settings. It is also fitted with a pistol grip allowing for basic functionality such as a record button and a joystick to control the gimbal manually.
The Osmo is not just a consumer-level camera; it holds huge potential for professional videographers.
“For the first time ever in a handheld camera, the Osmo brings with it professional cinema-quality stabilization” said Ryan Connolly, director of Film Riot. “It literally puts the power and quality of a movie-professional camera in your hands”.
The full range of Osmo’s capabilities are demonstrated in DJI’s ‘Moments’ video.


The DJI Osmo will be available to the US market later this month at a price of $650.