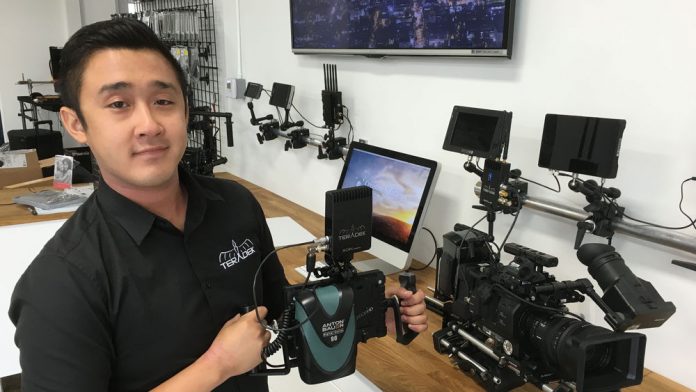 Where can videographers, filmmakers and others in the industry go to see some of the latest and greatest devices designed to enhance and support their work? For those located in Southern California, the answer is the newly opened Creative Solutions Los Angeles showroom (CSLA). As we arrive, Andrew Ng, Teradek’s Director of Marketing, greets us at the door. He promises to get us in front of several live demos of the new products that SmallHD, Paralinx and Teradek launched at IBC in Europe last month which are making their U.S. debut at the CSLA opening.
The first product we look at is the Bolt Sidekick, a wireless video receiver designed to work with all of the Bolt 300, 600 and 2000 models. “The Sidekick is something our customers have been demanding — a nice little receiver to have on a director or AC monitor because it’s so lightweight,” says Ng. It has a range of 300 feet and retails at $1,990.
Next up is the new Paralinx Ace — featuring real-time, uncompressed wireless HD video in a very small form factor. Super lightweight (about the weight of an iPhone 6), the zero-delay wireless transmitter/receiver combo comes in SDI and HDMI models, with the retail starting at $1,299.95 for HDMI and $1799.95 for SDI.
Ng points over to a corner where another new system is being highlighted  — Teradek’s Connected Set. “What’s been getting a lot of attention in the cinema industry lately is the idea of synchronization across the entire set,” he says. “So here you have our zero-delay transmitters and receivers." He points to a small box placed next to a monitor. “This station represents a Digital Imaging Technician’s color cart. Here we receive the uncompressed video signal and distribute the feed back throughout the set,” he says.
Ng goes on to note the importance of live color-grading, especially with all the cameras shooting in logarithmic color spaces. “There needs to be a way to give your entire creative team a way to see what the final visual product will end up looking like,” he says. “So we introduced the Teradek COLR, which allows an on-set color system to wirelessly grade the video image in real-time.” The COLR unit retails for $990 and works with any video transmission system.
The central component of the Connected Set idea comes from the Teradek LOKR now being introduced in the U.S. “LOKR will take any flavor of video —whether it is 3G-SDI, HDMI or even USB 3.0 — and record proxy files of every take which you can watch live on your iPad,” says Ng.  iPads can be distributed to executives and clients on set and they can review all of the footage from the entire project on-demand. “We’re also integrated with frame.io, a cloud-based server, and LOKR will automatically upload it there so all the reviews and all the dailies are kept in a type of ecosystem,” he adds. As LOKR is still in development, the price is still to be determined.
Also on-hand is Greg Smokler, Founder & General Manager of Paralinx and the General Manager of CSLA. He sees CSLA as having the ability to make for a “curated customer experience” — similar to those of established brick and mortar showrooms like the Apple store, where people can come in and get educated about the products. “All our products revolve around the camera, which as camera people we see as the nucleus of the set. Our showroom is full of real cameras, allowing the customers to play around with every type of transmitter, monitor, and streaming device, get a feel for them and also speak with someone who intimately knows the products.”
Smokler adds that as many of the employees at CSLA come from the film world, they are familiar with the demands of the on-set environment and can assist with troubleshooting, as well as sales and support. “What we offer at CSLA is the ability to educate, support, and outfit the perfect setup for your upcoming shoot,” he says.
CSLA is located at 5329 West San Fernando Road in Los Angeles, with hours from 9am to 5pm, Monday through Friday and weekends by appointment. Vitec has plans to open more showrooms around the nation in the future.