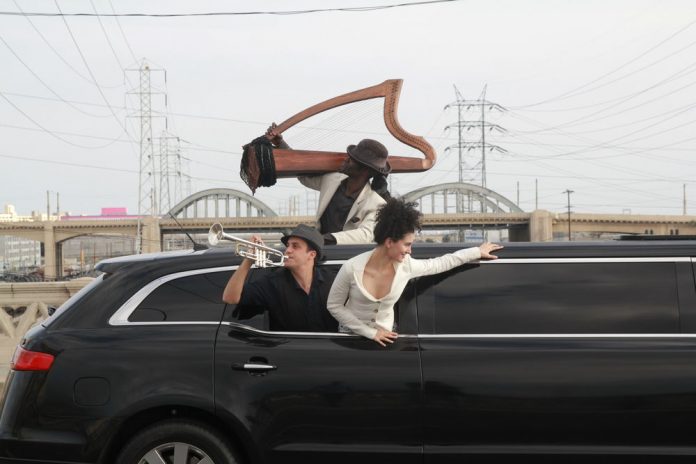 The one constant between an opera and its audience is that the performers are on stage while the audience sits and watches. So why am I being driven through iconic and secret locations dotting the highways, byways and side streets of downtown Los Angeles as a ticket holder for HOPSCOTCH, the first ever car opera? It’s because the performers and musicians are moving right along with me as I’m shuttled from one limousine to another, each with their own microcosm of performers and scenes set inside the cars, ferried to and from locations such as bookstores and alleyways and parks and warehouses bursting with the life and vitality of the City.
HOPSCOTCH is predicated on the philosophy of interaction and the free-flow of music, songs, thoughts and actions. Divided into three 90-minute routes, with each journey telling a subset of the story, I’m taken through a portion of the entire performance. And as the limo circles what appears to be an accident in which a car has hit a motorcycle — both composed as wooden sculptures and joined by live actors — I reflect on the knowledge that those in the two other routes are also discovering their own set of “chapters” which, while different from mine, intersect in as powerful a fashion as mine do.
Being able to participate in this pre-opening run-through, it is astonishing how the cast and crew of over 100 are able to coordinate what is basically free-flowing and chaotic situations. That’s especially true because what I am seeing is not limited to me alone; both video and audio is being streamed wirelessly back to the CENTRAL HUB — a pop-up outdoor structure wherein the audience are being treated to a 360 degree view, courtesy of 24 large flat panel screens,  which are displaying everything that is occurring both inside and outside of the cars in real-time.
This is all being accomplished through the use of cameras, wireless microphones and dozens of headset and lavaliere microphones. The limousines posses interior camera microphone systems inside and/or rack-mounted wireless systems hidden in the trunk — the twin antennas poking out from the top of the cars being a dead giveaway. These cameras and microphones dot the interior of the limousine so as to pick up not only what any performers are saying and singing, but also the music being played as well as a cornucopia of multimedia recorded sounds and effects. The Sennheiser AVX system that is in play is able to discreetly capture the ambient audio and, when combined with the hidden lavaliere microphones inserted into the limousine’s ceiling or under a table or behind a seat, creating a level of intimacy to be shared not just by those physically there, but for those who are watching from miles away.
All of the 24 performances that occur are being transmitted to the CENTRAL HUB through the Sennheiser guidePort system, at which point the audience, having donned MOMENTUM 2 headphones, are able to direct themselves towards any of the 24 displays displaying a different performance and listen in.
Besides the cast, crew and the 24 drivers piloting the limousines, there are six writers and six Los-Angeles based composers who are responsible for all that is being seen and heard. As Yuval Sharon, Director HOPSCOTCH/Artistic Director/The Industry, has pointed out, this performance redefines not just the nature of the operatic art from but of what it means to perform.
Performance dates are Oct 31, Nov 1, Nov 7, Nov 8, Nov 14, and Nov 15. Further information can be found by going to www.HopscotchOpera.com