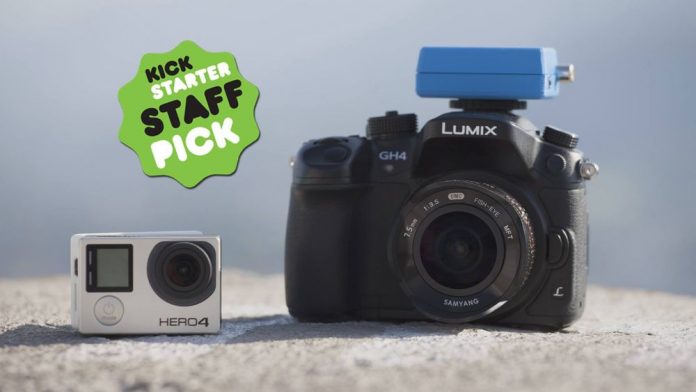 French company SteadXP SAS have launched a crowdfunding campaign to produce a combined hardware and software solution with the bold claim that it is “the future of video stabilization”. The SteadXP hardware comes in 2 versions: the SteadXP@ is for use solely with GoPro cameras while the SteadXP+ is compatible with any camera with a standard cold shoe, stereo microphone input and a clean video output (AV Out or HDMI) including DSLRs and cinema cameras.
Powered by a 32 bit ARM processor, the custom SteadXP hardware incorporates both a 3 axis gyroscope and 3 axis accelerometer. The hardware is mounted on your camera to record its movements while the camera records unstabilized video as usual.
In post production the SteadXP software uses the camera movement data to build new “virtual camera trajectories” to stabilize your footage, removing geometrical distortion, vibration and rolling shutter artifacts. The software allows you to choose stabilization profiles such as horizon lock to keep the horizon level in your corrected footage or to reframe to follow the subject.
The SteadXP software also includes algorithms to create parts of the image from past and future frames where excessive movement in a sequence results in the edge of the image frame being revealed.
http://youtu.be/FPAjd0STnRs
The sample videos on the SteadXP crowdfunding page are very impressive, though closer examination reveals that a high level of cropping is applied to the footage during processing which will reduce final image quality. In addition, the need for the SteadXP system to record data to the camera’s microphone inputs means users will need an external audio solution to record sound.
The SteadXP team have been working on their product for 3 years and the crowdfunded contributions will be used for final development and testing of the hardware and software.  As well as getting the finished SteadXP system at a substantial discount, pledgers get to take part in an exclusive video contest in 2016.
The initial crowdfunding goal for the SteadXP project was 150,000 euros and five days after launch over 250,000 euros had already been pledged. Stretch goals include additional software features to automatically follow a subject and VR capabilities.
The SteadXP crowdfunding campaign is running until 10 October 2015. For more details go to www.steadxp.com.