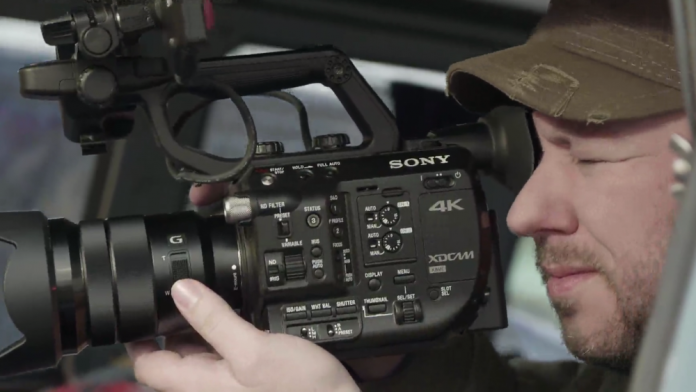 There's been a lot of action in the camera department at IBC this year, at least from the Sony booth. Not only did we get a new version of the a7S, the a7S II, but Sony Pro has just announced a smaller and cheaper version of the popular PXW-FS7 which came out last year.
The FS7 has already been been lauded for being an incredible value, earning Videomaker's Editor's Choice award. The PXW-FS5 looks to take the best of the FS7 and package it into a more approachable camera.
[image:blog_post:57963]
Looking at the specs, it is a lot to love about the FS5, but there are also some unfortunate omissions.
Notably missing is any sort of RAW recording format, DCI 4K resolution, and frame-rate above 30 at anything above1920 x 1080 resolution. Fortunately, Sony is advertising that in the future they will release firmware to give users the ability to record RAW externally — likely with the use of something like an Odyssey 7Q. Sony is good about following through on these promises, though for the combined cost of the FS5 and an external recorder, you might as well just buy an FS7.
From the look of things, pure tech-specs aren't really the point of the FS5. Rather the versatility of the camera in such a small form factor is the main selling point. At less than two pounds, it's 60% lighter weight than the FS7, yet it retains many of the features needed by working professionals, including a hand grip, XLR inputs, BP-U90 battery compatibility, and built-in variable ND filter. In addition to Sony E-mount, the PXW-FS5 is also capable of accepting PL, EF, Leica and Nikon lenses (with the appropriate adapter).
The Sony PXW-FS5, body only, has an MSRP of $6,700 (street prices are showing up around $5,600) and should begin shipping in November, 2015.
http://www.youtube.com/watch?v=WYM7CNsRuJI
http://www.youtube.com/watch?v=dGQeYAtxhlU
http://www.youtube.com/watch?v=YAEoer-wg14
http://www.youtube.com/watch?v=ivj8hp-QiII
http://www.youtube.com/watch?v=iTbE_C8wDJw
Mike Wilhelm is Videomaker's Editor in Chief.