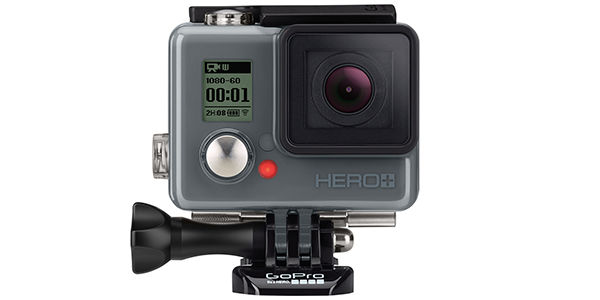 GoPro, Inc. has released an all-new Wi-Fi and Bluetooth® enabled camera dubbed the HERO+. Clocking in at under two hundred bucks, the HERO+ is an affordable entry into the GoPro lineup.
The HERO+ is waterproof and mountable, as expected, and it’s compatible with GoPro’s huge selection of mounts and accessories.
From a performance standpoint, the HERO+ captures 1080p60, 720p60 and 8MP single, Time Lapse and Burst photos. The biggest differentiation between the entry level HERO and the new HERO+ is the addition of Wi-Fi, which allows it to connect with GoPro’s mobile app.
“Whether mounted to a weather balloon floating 100,000 feet above the earth to capture a sunrise across the stratosphere or in the hands of a child recording their backyard tree house adventures, HERO+ is built to capture your imagination wherever it takes you,” said Nicholas Woodman, GoPro’s founder and CEO.  “Even as we continue to raise the bar for our highest performing cameras like HERO4 Black, Silver and Session, we remain committed to developing simplified products like HERO+ that make GoPro life-capture accessible to everyone.”
http://youtu.be/GZum5RYGVi0
In addition to the HERO+, GoPro has done something wonderful in lowering the price on the cute and capable HERO4 Session. Clocking in at $299.99 MSRP, we can expect to see these cubes stuck to dogs, bicycles and skydivers everywhere very soon.
For those keeping score, the growing GoPro lineup looks (and costs) like this:
–  HERO4 Black:  Pro-quality capture. Simply the best.     $499.99
–  HERO4 Silver:  High-performance capture. Touch-display convenience.   $399.99
–  HERO4 Session:  GoPro Performance, Simplified.  $299.99
–  HERO+LCD:  The perfect entry-level GoPro + Wi-Fi + touch-display convenience.    $299.99
–  HERO+:   The perfect entry-level GoPro + Wi-Fi.    $199.99
–  HERO:  The perfect entry-level GoPro. $129.99
HERO+ will be available at authorized retailers around the world and on GoPro.com beginning October 4, 2015. Notable features include:
– 1080p60 and 720p60 video
– 8MP photos with Single, Time Lapse and 5 Photos-per-Second Burst modes
– Built-in Wi-Fi and Bluetooth® connect to GoPro App and Smart Remote
– Rugged, durable and waterproof to 131’ (40m)
– Integrated camera + housing design
– QuikCapture enables power-up and recording start with the press of a single button
– HiLight Tag lets you mark key moments while recording
– SuperView™ wide-angle field of view
– Auto Low Light mode intelligently adjusts frame rates for optimal low-light performance
– Built-in microphone
– Wearable and Mountable, Compatible with GoPro’s array of mounts and accessories