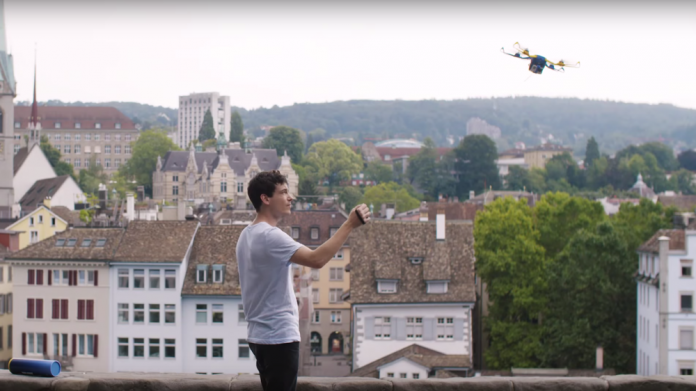 Drones fly free — and that’s the problem. How do you keep one under control while at the same time making sure it goes where you want it to without hitting something? The Fotokite Phi solution is to have it on a “leash” — or tether — so that it can never wander off.
With a weight of only 12 ounces, the uniquely designed quadcopter collapses into a package small enough to fit inside a carry tube the size of a thermos but can be restored to its full shape within seconds. Then it’s the work of a moment to extend its tether, punch the power button on the hand-held controller to start the blades rotating and release it to have it float up. Power is supplied through the tether, with up to 15 minutes of flight per charge. The positioning is decided on and maintained through a series of hand gestures. The Fotokite Phi uses embedded sensors to measure the angle of the tether relative to the user, so it moves when you do. This eliminates the possibility of losing control since there is no wireless or GPS functionality in play.
http://youtu.be/aglTWdI-4Bo
It is designed to work with the GoPro Hero 3/3+/4 series of cameras and can be adjusted as to angle before take off. The Fotokite Phi is perfect for those looking to enjoy some quality “drone” time, but it’s also for the action sports enthusiast, guerrilla journalist or those looking to shoot aerial views. Due to the tether, it is not regulated as a drone and so can be used in crowds.
Two models are to be made available: the $349 Fotokite Phi, which has been described above, and the Fotokite Pro. The Pro adds to the functionality with hot-swappable batteries, control through a smartphone or tablet app, a tablet for use along with the included GoPro HD HERO4 Black Edition camera and download capabilities for an uncompressed low latency Full HD video stream, plus simultaneous onboard recording and multi-receiver capabilities. Contact Perspective Robotics for pricing. Both quadcopters come with a hard carry case