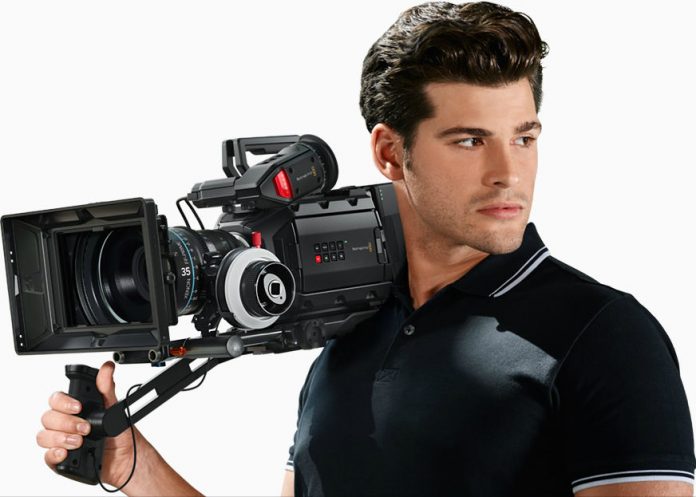 The arrival of the Blackmagic URSA Mini 4K Digital Cinema Camera signals changes that reflect well for live production and studio use. Announced at NAB 2015, the camera is now in production and scheduled to start shipping this month. The URSA Mini comes in an ergonomic shape whose aluminum body weighs in at only 5 lbs. and includes a side handle for hand-held work. There is also an optional shoulder mount with a quick release plate for taking the camera from handheld to shoulder to tripod.
The camera provides cinematic 4K images via a Super-35mm 4K sensor (3840 x 2160 native resolution) whose sensor’s size is also large enough to accommodate lenses of the APS-C DSLR format. A global-shutter provides 12 stops of dynamic range, with multiple connections including 2 LANC inputs as well as 12-SDI and HD-SDI outputs. Power is supplied through a 4-pin XLR industry standard connector working with 12V-30V external power supplies.
The URSA Mini records in the CinemaDNG format (uncompressed raw data) as well as in compressed RAW at 3:1 and 4:1 ratios. Additionally, UHD recordings (3840 x 2160) and 1080p video can be recorded as ProRes files (ProRes 444 XQ @ 312.5 MB/s down to ProRes 422 Prox@ 5.6 MB/s data rate). Recordings go onto one of the dual CFast 2.0 memory cards at up to 60 fps, with one card taking over when the other becomes full. Camera control from both buttons as well as a folding 5-inch capacitive touchscreen LCD monitor (1920 x 1080 resolution). Audio is provided through a built-in stereo microphone, although external mics can be used through the two XLR mic inputs (featuring switchable 48V phantom power).
A B4 mount for the PL version of the camera can replace the PL mount — which is removable — and provides the means for continuing the use of legacy broadcast lenses. Conforming to the B4 lens standard, the mount comes with a lens-control connector for powering the lens and for supporting analog and digital lens control.
Here is our original coverage of the URSA Mini and other Blackmagic announcement back in April:
The Blackmagic Design URSA Mini 4K Digital Cinema Camera (EF-Mount) is to be available this month at a retail of $2,995, and will include a DaVinci Resolve USB dongle for unlocking the full version of the software. The B4 mount will arrive in November at a retail of $295.00.