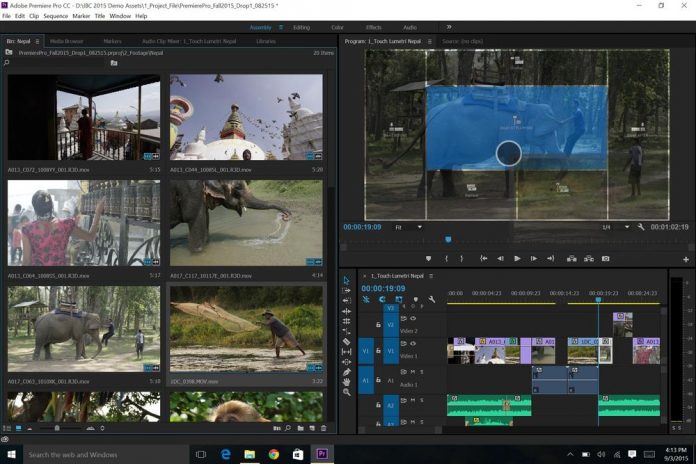 Today, in anticipation of IBC 2015, Adobe announced innovative advancements to Adobe Creative Cloud’s video applications and workflow. The newly released Creative Cloud 2015 sees a handful of new tools and workflow improvements for video producers, allowing them to work with higher quality footage and gain even greater access to the tools they use on a regular basis.
http://youtu.be/_3BCKyTXejw

Users of Adobe Illustrator CC have been able to adapt Illustrator’s UI for optimization on  touch screens, a handy feature for users of the Wacom Cintiq Companion. The newest update to Creative Cloud 2015 features a new touch environment for Premiere Pro CC, After Effects CC, and Character Animator. This environment is optimized for the Surface Pro 3, Microsoft Windows 8 and users of the Apple trackpad devices.
The new UI enhancements are useful for editors working outside of touch environments as well. One UI feature found in After Effects is the stacked panels feature. After Effects users are well aware of the numerous palettes available and needed for creating in After Effects. The stacked panels allow the user to have access to a wide array of palettes without the need to have all the palettes open at one time, saving valuable screen real estate.[image:blog_post:57919]

Video editors need to have tools that work with the latest advancements and increases in screen resolutions. The latest update increase the screen resolution and native formats supported by Adobe Premiere Pro CC 2015 and After Effects CC 2015. This includes the inclusion of working with High Dynamic Range (HDR) images. As result, editors will have greater control over the color fidelity and detail in their footage.

Social media platforms are now the most popular destination for delivering video. Adobe Media Encoder makes it easier than ever before to render and distribute video directly to popular social media destinations; such as YouTube and Facebook. Users can enter in their social media accounts’ information, and upon rendering their video, Media Encoder will automatically upload it to the platform of their choice.

Adobe Audition CC 2015 received a long desired request with its new Remix feature. Audition has the ability to analyze music tracks and make appropriate cuts to retime tracks to a targeted length. It’s able to automatically recut the tracks while keeping the music in rhythm and on key. This keeps the track musically structured and cut to fit the story on hand.[image:blog_post:57921]
Adobe continues to introduce new tools while updating improvements for its Creative Cloud software. These innovative new features come on the heels of CC’s most current upgrade. Along with the Creative Cloud updates, Adobe continues to improve Adobe Anywhere and Adobe Primetime, its distribution and monetization platform.