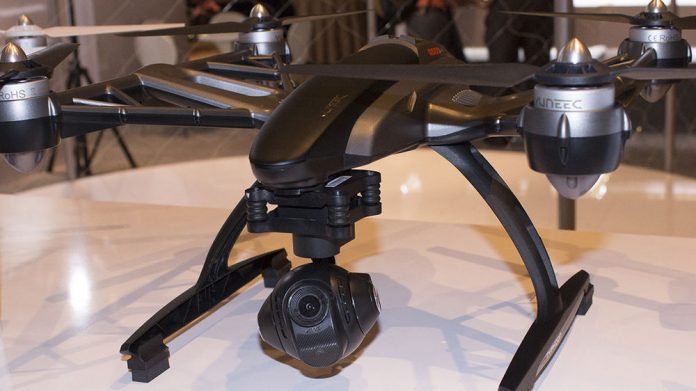 There were plenty of drones to see at the InterDrone Expo in Las Vegas, but here is the show’s five hottest in no particular order.

It’s so small that it’s hard to believe it can fly at all much less for around 10 minutes. That flight time includes capturing HD (1280 x 720) video. The price of the Micro Drone 2.0 is small too, less than $150. You may want to wait for a few months for Micro Drone 3.0 to come out though. The new model will have features including flight control via a mobile app, an optional gimbal and the ability for owners to 3D print their own Micro Drone 3.0 frames.

The Inspire 1 is an impressive 4K shooting drone, but with the new Zenmuse X5 and Zenmuse X5R cameras, it’s in a class by itself. The cameras are set to release in a few weeks and feature a Micro Four Thirds (MFT) lens mount and a Micro Four Thirds sensor with over 12 stops of dynamic range. The X5R can record lossless raw at 2.4Gbps to an onboard 512GB SSD. Even though the lens mount is MFT, lensing options are limited to the lenses DJI has found will balance on the drones’ gimbal. So far the options are an Olympus 12mm f2, a Panasonic/Leica 15mm f1.7 and a DJI branded 15mm f1.7 (also Panasonic/Leica). The new Inspire 1 cameras will also have an optional remote follow focus unit.

While it doesn’t look much different than the many other drones at the show, Splash Drone is capable of landing and floating on water without being damaged. The drone has a waterproof gimbal with a GoPro 4 case and a controller with 7 inch video monitor. Now you can take your drone over the water with a little less worry. Splash Drone kits start at $1,599.

While it isn’t the only drone with a 4K camera, the Typhoon 4K does stand apart from many others in that it’s Sony-made CMOS camera sensor has a global shutter. This allows the camera to capture footage without the lean of vertical lines, “jello vision” and other motion artifacting common to many camera sensors with rolling shutters. The optional SteadyGrip allows you to attach the drone’s gimbal and camera to it along with a smartphone to create a handheld camera rig for shooting on the ground. The Typhoon 4K with SteadyGrip retails for $1,299.99.

Hobbico, a company with 30 years in the radio controlled aircraft business, introduced the Xiro Xplorer Drone system at InterDrone. The G and V model Xplorers have many features now common in drones such as GPS based flight controls, app based gimbal controls, and video monitoring; however, they also have features that are not so common including one button automated take-off and landing abilities and an on board WiFi extenders. The Xplorer G comes with a gimbal and a GoPro mount for $699, and the Xplorer V comes with a gimbal and a 1080p camera that supports Adobe DNG raw photos for $799. The Xplorer are available now and a 4K camera upgrade will be releasing soon.
Odin Lindblom is an award-winning editor and cinematographer whose work includes film, commercials and corporate video.