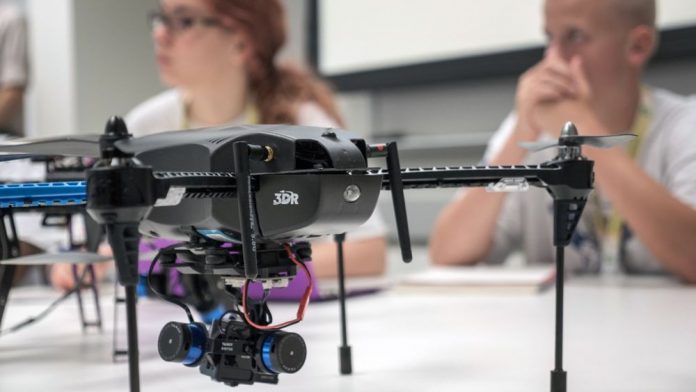 3D Robotics announced the launch of an academic initiative bringing Unmanned Aerial Vehicle (UAV) education programs to schools across the country. The 3DU program will be aimed at K-12, university, graduate and post-graduate students and will offer hardware discounts and student sponsorships to encourage the next generation of drone-users.
“In the past, drone research and education was limited to aerospace or engineering departments,” explains 3DR CEO Chris Anderson. “We’re excited to bring this opportunity to students nationwide to empower the next-generation by making the tools they need more attainable and affordable.”
3D Robotics is North America’s largest manufacturer of consumer drones, and has demonstrated its commitment to consumer education with a series of product demonstration and tutorial videos — including this video for the ‘Solo Flight School’:
http://youtu.be/erC-GqHWH-s
3DR is already active in the academic field, running sponsorship programs at Stanford University and the University of California, Berkley. Tom Clark, Development Engineer at the University of California, Berkeley, explained the benefit to students of 3DR’s sponsorship: “With 3DR’s donation of a set of drones, as well as continued support from their engineers, our students can spend less time learning about drone technology currently on the market and instead focus on developing their own applications and hardware to build on previous drone technology.”
Educational discounts will also be available on supplementary products, such as the quadcopter eBumper sonar system Panoptes, as the 3DU has partnered up with a number of different companies. Further to the announcement of the 3DU education program, 3DR is also creating an open app development platform called DroneKit, enabling students to learn about, experiment with and create drone apps.
If you want to keep informed on the progress of the 3DU program, 3DR will regularly publish an academic newsletter. More information on the program, as well as the newsletter sign-up is available here: www.3drobotics.com/3DU