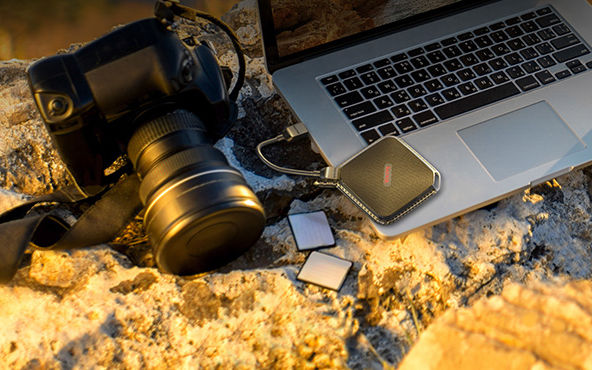 There's a great new option for video editing on the go — the SanDisk Extreme line of deliciously-fast portable disk drives, that combine the memory-access transfer rates of solid-state drive (SSD) storage with the SuperSpeed USB 3.x interfaces.
After all, while today's laptops can be wonderfully thin and light for travel, the trade-off is limited disk storage capacity, which can be a big problem given the headroom we need for HD and now 4K video storage and editing.
External hard disk drives (HDDs) offer multiple terabytes in pocketable sizes, but use magnetic disks that constrain transfer speeds to the physical motions of spinning platters and magnetic heads on actuator arms, limiting the usefulness of portable drives for serious video work.
SDD storage would seem to be the perfect answer — using memory chips instead of mechanical parts to be much more rugged and provide much faster access time — except that SSD is still significantly more expensive than HDD, and therefore typically available with smaller capacities.
But the price gap is narrowing and the interfaces are speeding up, so SanDisk has introduced two new SSD external drives that should be rather tempting for travelers and video enthusiasts.
The SanDisk Extreme 500 portable SSD drive is ready to travel, at around half the size of a smartphone (about three inches square, 2/5 of an inch thick, and weighing 2 3/4 ounces). It's protected with rubber bumpers, and even has a ring to clip onto a bag.
And it's fast — around four times faster than an external hard drive, with read speeds up to 415 MB/s and write speeds to 340 MB/sec.
The Extreme 500 is available in capacities of 120GB, 240GB and 480GB, list priced at $99.99, $149.99 and $239.99 respectively.
The SanDisk Extreme 900 portable SSD drive then offers up two terabytes of storage in a more traditional external drive shape, in durable aluminum (around 5 1/4 x 3 1/4 x 7/10 inches and 7 1/3 ounces).
With the new USB 3.1 interface (twice as fast as USB 3.0), it's nine times faster than a portable hard drive, with read and write speeds up to 850MB/s.
The Extreme 900 is available in capacities of 480GB, 960GB and 1.92TB, list priced at $399.99, $599.99 and $999.99 respectively.