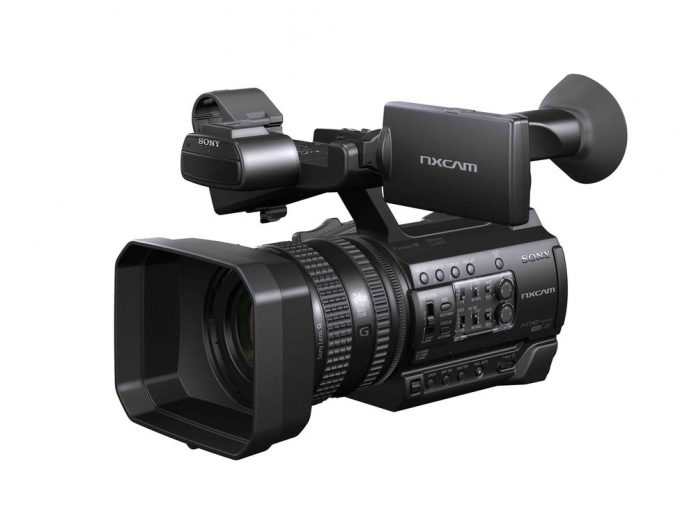 Sony today announced an addition to their impressive lineup of professional compact camcorders with the HXR-NX100. This is the latest Sony to feature a 1.0” type sensor, which is proving to outperform many 3-chip competitors.

The chip is a good one. It is a 1.0” type Exmore R back-illuminated CMOS sensor with 20 megapixels, similar to the one found in the excellent RX10. The sensor is roughly the size of a Super 16mm film frame, and it promises to deliver high resolution, low noise, and high picture quality in any conditions.

Unlike many pro camcorders, DSLR shooters will want to give this camera a second look.

While traditionally, many  camcorders haven’t offered the same large sensor benefits of a DSLR, the large sensor in this NXCAM makes it an interesting choice for low-light shooting and cinematic depth of field coupled with the all of the benefits of a professional camcorder. The amazing image quality is backed up by the image stabilization, external controls, pro audio connections, optical zoom and other features that make professional handheld camcorders a dream to work with.

Those external connections and controls on the HXR-NX100’s lightweight, ergonomic body are plentiful. Three independent manual lens rings give easy access to zoom, focus and iris functions. The camcorder’s connectivity options include HDMI, Multi/Micro USB, XLR terminals, REMOTE, Composite (BNC) and Multi Interface (MI) Shoe for use with a wide range of accessories without the need for cables, such as Sony’s HVL-LBPC Video Light and the UWP-D wireless microphone series.

The NX100 touts a Sony G lens delivering 12x optical zoom from a 29mm angle of view and a 24x digital Clear Image Zoom. The digital zoom is aided by Sony’s By Pixel Super Resolution Technology, and a Digital Extender, which can expand zoom performance to up to 48x. To control exposure in these extreme zoom situations, the NX100 features a four step ND filter.

“This new camcorder is a great choice for professionals who need a flexible and high-performance compact camcorder, or pro-sumers looking to step up to an easy-to-use pro model,” said Jeanne Lewis, marketing manager, professional digital imaging, Sony Electronics. “With its big 1.0” type sensor, the HXR-NX100 outperforms many competitive 3-chip offerings and allows content creators to capture beautiful images in any environment.”

Key features of the HXR-NX100:

· Maximum 48x zoom for wide range shooting. The lens offers a 12x Optical Zoom from 29mm angle of view at wide end, which can be increased to 24x with Clear Image Zoom while retaining full resolution thanks to By Pixel Super Resolution Technology. Zoom performance can be doubled at any point with a Digital Extender up to 48x.

The HXR-NX100 camcorder is planned to be available in October 2015.