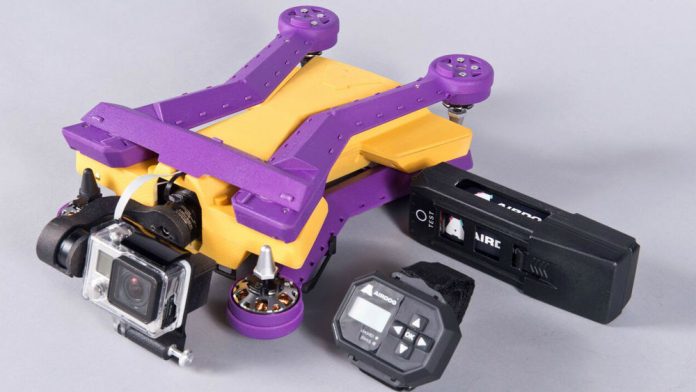 Drones are great for getting aerial shots, provided you can keep the camera aimed where it needs to be. Enter AirDog, the Auto-Follow Drone for GoPro Cameras, which doesn't expect or depend on an operator keeping it in line. AirDog lives up to the loyal nature of its namesake by following its owner, who is wearing on his/her wrist the digital controller called the AirLeash.

The durable and waterproof 4 lb. drone (w/battery and camera) easily fits inside a backpack. Extending its body and prop arm propellers, the GoPro camera is attached to a front-mounted gimbal and turned on. After the drone’s battery pack is inserted, AirDog is placed on a level surface so that the automated take-off sequence can be activated (this also works in reverse). Within moments AirDog rises to its operational cieling of 14,000 feet above sea level. What happens now can be similar to other drones — with the operator controlling the AirDog's height and maneuverability — but there's also the option to go in an entirely new direction. AirDog can be “told” to keep the camera aimed at the AirLeash (worn or placed on a bike or car seat, etc.) and will maintain a discrete distance and height automatically at a top speed of 40mph. To avoid camera shake, the gimbal on which the camera is mounted is gyroscope stabilized.

AirDog has a number of flight modes: Absolute Follow, where the drone’s position remains constant relative to magnetic north from the rider; Follow Path, repeating exactly the operator's movement trajectory; Follow Line, in which the drone will fly down a pre-set line between two or multiple points; Hover and Aim, where  AirDog maintains its position in the air.