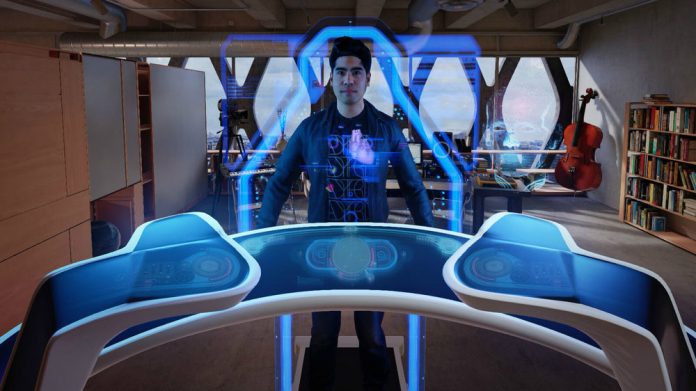 I’m feeling a bit leery as I walk up the darkened stairs of the performance space in downtown Los Angeles — on the other side can be found General Electric’s (GE) “GE NEURO EXPERIENCE,” a carousel of displays all devoted to virtual reality and the ecosystem GE is building to support it.

The goal: demonstrating the industrial and healthcare innovations that VR can provide. Now I’m familiar with VR and know that part of the problem has been the “lag” of the graphics when moving one’s head around, as the virtual “world” inside the headset being worn tries to keep up. That, combined with a lack of true photo-realistic resolution, makes it hard for me to believe that what I am seeing is “real.”  Add the sense of vertigo that can also occur and you’d be hard pressed to find me spending a lot of time watching a VR movie.

But the first thing I’m taken to see is definitely real — AMD’s graphic powerhouse, the Radeon R9 Fury X GPU computer hardware card. Half the size of previous cards, it contains so much processing “oomph” that it can drive up to three 4K displays simultaneously — that’s extremely impressive since most cards today have trouble driving a single 4K display.

As I watch a racing game splashed across 3 monitors in 4K resolution, I’m told that the speed and resolution of this card makes it eminently suitable for VR applications — and that built into the hardware are drivers for syncing up the two “views” that someone wearing a VR helmet sees (and at 90 frames a second, being many times faster than previous available frame rates). All this makes the price of under $700 seem astounding, especially when adding in the attached liquid cooling system for keeping the card running efficiently.

To see the card in use, I’m now taken over to a circle drawn on the floor and told to stand within its confines. A prototype VR helmet with higher resolution capabilities is placed on my head, and the film “CyberBrain” begins.

I’m now able to “look” around a room — and by that I mean I can look up at the ceiling, down at the floor and not just to the sides but behind me as well. Along with the limited movements within the circle itself, there’s no feeling of discomfort.

But it gets better as photographer and DJ Robert Wu appears before me and, as music begins to play, I’m sucked into his brain, which now expands to fill my universe. The view is staggering, both from the intricate detail and complexity of the brain; the colors and animation of “thoughts” being processed as the music plays is astounding. Looking all around (and I mean ALL AROUND), I feel like I’m on a carousel at Disneyland with bright lights and vibrant colors swirling everywhere, punctuated by the sight and sound of fireworks-like light exploding at me, off from me and out to the distance.

As entertaining an experience as this would be in 2D, the virtual reality “view” blows that out of the water. In addition to potential cinematic applications, I can see how useful and productive VR can be as a tool for physicians and those looking to view the intricate detail that is the human brain, which still holds many mysteries to uncover.

Removing the headset, I’m taken over to other exhibits, which include a 360 degree view of a new-age locomotive and the science channel created by GE for Samsung’s Milk VR platform: hosting and distributing free VR content from GE’s own R&D labs as well as science stories from third-parties. Content is viewable by those wearing a Samsung Gear VR headset.

I point out that none of the “negatives” associated with VR are in play here, agreeing with the statement made by Katrina Craigwell, Director of Global Content & Programming, GE, that “it takes an incredible amount of creativity and computational horsepower to create these virtual worlds and ensure viewers are completely comfortable when interacting within them.”

I might add that the excitement for VR can only increase as the headsets come to market and the ability to sample VR for oneself becomes available. I know that I’m looking forward to it.