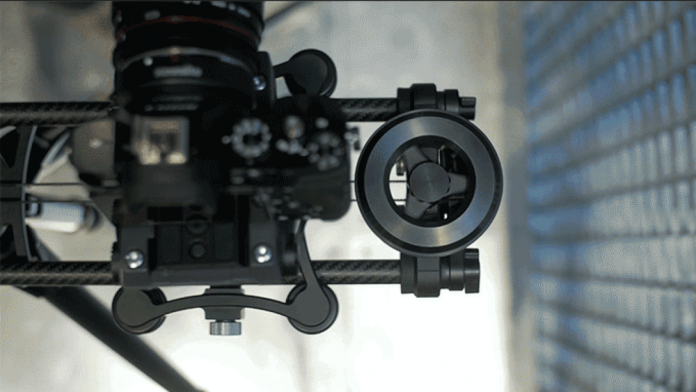 Sliders are great tools for adding production value to a shoot, and a slew of compact low cost entries from Kessler, Cinevate and Edelkrone have dominated the headlines this year with solid build quality, portability and relatively painless entry cost. Once add-ons enter the picture, prices creep upward. Add in varied feature sets and large price variances, and it's tough to know which product to buy. The folks at Rhino are looking to simplify that decision with the introduction of the Rhino Slider EVO and Rhino Motion controller.

To start, the interchangeable rod manual slider is ready to use right out of the box, featuring steel or carbon fiber rods. It has a brake, and adjustable feet for less-than-smooth surfaces. Adding the motion controller is a simple affair. Simply clip the motor to one end of the slider, and the magnetic controller unit plugs into the motor. The magnets are a cool idea,  as you can simply magnet the controller to the motor when holding it isn't convenient.

The easy interface on the Rhino Motion allows users to select different modes, say for video or time lapse shooting. Controllable variables include distance, duration, and in or out speed settings for speed “ramped” shots. The simple UI is aided by a nice, easy to read display and a large, clickable dial.

Add-ons to the unit include a "parallax" mount that rotates the camera on an axis while sliding to keep aim at a subject throughout the slide. The motor can also be left behind for an optional “inertia” wheel for jerk-free slides that use no power at all.

The folks at Engadget address the hot issue with motorized slider units: battery life. They report that "in an afternoon of testing, (and plenty of slides) there was still well over 50-percent (battery life) remaining."

Additional benefits of the device are upcoming firmware updates, and the ability to swap out the slider rods for longer ones, or swap steel for carbon fiber or vice versa. And if your camera is compatible, Rhino’s controller is able to trigger your shutter, is awesome for night time-lapse shoots, as the controller smartly only takes a picture when the slider isn't moving. Good bye, blur.