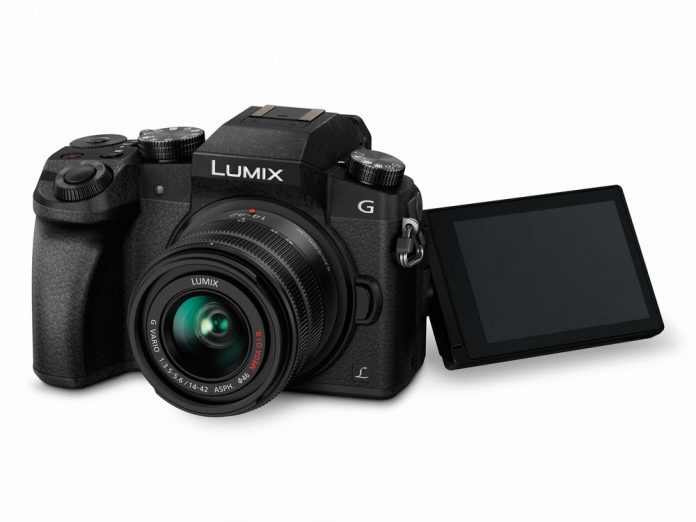 The 4K video capabilities provide for a number of features, for example, the “4K PHOTO” feature allowing an individual frame to be extracted in printable 8MP resolution (the shooting must be done @ the 30fps setting). Other 4K related features include “4K Burst Shooting” for almost unlimited shooting @ 30fps once the shutter button is depressed, “4K Burst Start/Stop" that start/stops consecutive shooting and “4K Pre-burst” for automatically recording a total of 60 images right before and after the shutter is released. All 4K modes allow for images to be saved in 8MP resolution.

Boasting a precision OLED display for the Live View Finder, the LUMIX G7 has a 16MP Digital Live MOS Sensor and quad-core CPU. There is also advanced noise reduction which includes a filter for removing chromatic noise as well. A high ISO of 25,600 can be had as a result. There are also a number of specialty functions, such as an ultra-wide horizontal/vertical panoramic shooting, Scene guide with 20 sample situations, Creative Control with 22 filters, and Time Lapse Shot/Stop Motion Animation. The camera uses Contrast AF for its focus system and can shoot at burst speeds of 8fps (AFS)/ 6fps (AFC)

Being integrated with WiFi, the camera can utilize a Panasonic app with a phone/tablet (iOS/Android) to shoot, browse and share images remotely. Additionally, there is the “Jump Snap” function whereby the user, holding a smartphone in his/her hand or pocket, can activate the camera’s shutter once the phone detects the highest position when the user jumps in the air.

The Mirrorless Micro Four Thirds digital camera is compatible with over 24 compact lens options. It will come in three configurations: Black or Pewter/Gun metal w/14-42mm kit lens for $799.99 and Black w/14-140mm kit lens for $1099.99. The camera is to be available in mid-June.