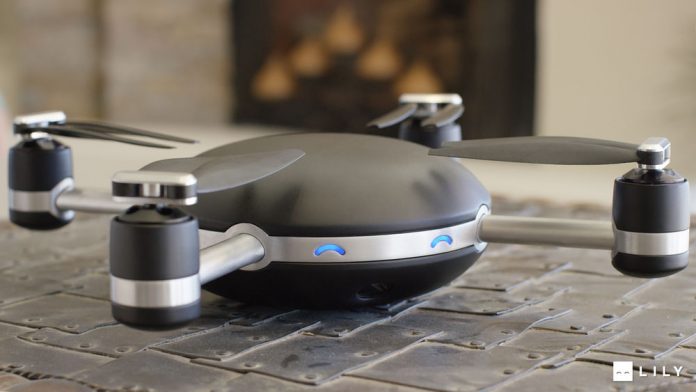 With the drone landscape evolving and expanding at breakneck speed, it's often tough to know which UAV is the right one for you. For some, maybe it's a DJI Phantom 3, for others a 3DR Solo+. But what about something simpler? Something waterproof, lightweight, automatic and ready to capture you in action. That drone has arrived, and it's the absolutely charming Lily Camera.

Launching the Lily Camera is as simple as tossing it. The Lily Camera uses sensors and cameras to take care of itself. If you run out of range, it stops and hovers until you're back in range. If the battery is ready to die and you haven't recalled it, and it will calmly set itself down.

There is a companion app for setting up flight and tracker parameters, and the Lily Camera ships with a tracking device which can be placed in a pocket or on your wrist in a waterproof casing. Once configured, the Lily is simply a toss away from doing it’s thing for the next 18-22 minutes.

And it’s thing is pretty cool.

According to Lily: “Lily is the world’s first throw-and-shoot camera. All you have to do is throw it in the air to start shooting. Lily flies itself and uses GPS and computer vision to follow you around. Lily is waterproof, ultra-compact, and shoots HD pictures and videos.”

As the video illustrates, the Lily ticks off a number of firsts. It's the first drone able to land on – or take off from – water.

What the video doesn't show is that it handles sound differently than many other aerial devices. The microphone for Lily is on the tracking device, and automatically syncs with Lily. So the drone is in the air, but the audio is captured at ground level. Makes sense.

So there it is. Check out their video and see if you need one. At an initial price of $499 and climbing to a retail price of $999 sometime after mid-June, the Lily is priced well for a device of this kind. Expect more updates from Videomaker throughout the year, as final product won’t ship until February 2016.