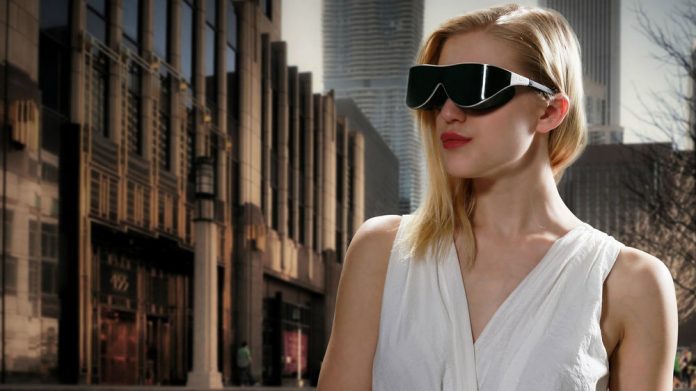 Everybody wants to wrap their head around virtual reality — but pay thousands of dollars? No way. So put on the Dlodlo VR glasses instead, because sticking your head inside a helmet doesn’t look cool. Or fit anywhere near as comfortably. And a comfortable fit means 1) a skin-friendly material weighing just 4 ounces and 2) you don’t need your prescription glasses underneath because the optics can adjust from 58mm to 70mm to correct the view. That view comes from a biomimetic optical imaging scheme that makes for a wider field of view; as in 110 degrees. And the military high-def display gets about as close to reproducing the color spectrum as something man-made can (97%).

But it’s how these VR glasses work that’s even cooler than how they look. The OS (operating system) is built-in, so it doesn’t matter whose brand of smartphone or computer it’s used with (the API is open so any developer can join in). For “brains” it’s got Android’s 4.4 running, plus Bluetooth to wirelessly sync with pretty much any modern phone, tablet, gaming console or computer can hook up with it. Plus there’s 3D viewing and 4K video compatibility. There’s even an interactive mode with touch and move-enabled controls. All this adds up to a fully immersive, edge-to-edge virtual reality experience

Specifics? Full HD resolution (2K) @ 16:9 aspect ratio, 120Hz refresh rate so distortion and “flicker” stays out of the picture, all powered by a 2000mAh internal battery charging via Micro-USB. Then include a pair of stereo speakers in the frames (w/external audio support) and even a built-in mic.

The Dlodlo VR Glasses come in a choice of Black, Ivory or Champion Bold. Retail is $699.00 at the Dlodlo website along with Amazon, Deal Extreme among others.