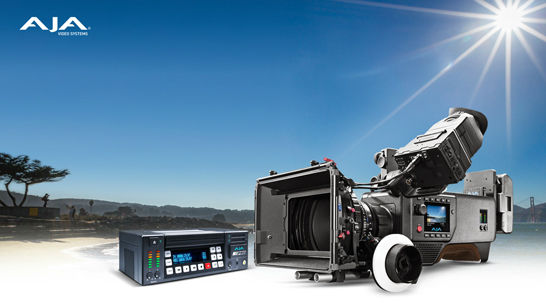 Those looking to get a CION for its 4K video capabilities already know what some of the strengths of this production camera are — but just as a reminder, besides being able to shoot 2K/HD and capture it and 4K/UHD video to cost-effective AJA SSD drives, there is in-camera recording directly to the Apple ProRes family of codecs and the ability to output AJA Raw @ up to 4K 120fps  via 4X 3G-SDI or up to 4K 30fps using a Thunderbolt connector.

But maybe the just under $10,000 price tag was holding potential owners back, despite all the specs or the camera’s compatibility with a slew of post production applications. If that was the case, it’s no longer valid because the CION’s been slashed to $4,995.00 — a savings of $4,000. And for those who bought the camera prior to May 26th, CION will offer two free AJA Pak 512 SSD drives (a retail value of $2,495.00).

AJA didn’t stop there though. Prices have also been dropped for the three Ki Pro family of compact and flexible solid-state recorders. The Ki Pro Quad is now $2,995.95; it enables 4K/UltraHD/2K/HD workflows, is able to bring camera signals in and simultaneously create editable 4K ProRes files and output to 4K/2K monitors and directly pass Canon RAW data to a computer/storage system via Thunderbolt. The Ki Pro is now $2,495.00; being both portable and tapeless, files are recorded directly from the camera without the need to re-render to an editing codec (thanks to edit ready Apple ProRes 422). It can be placed between a camera and tripod or mounted in an edit bay for recording to a removable storage module via  built-in FireWire 800. Additionally, on-set monitoring can be had through multi-display access. The Ki Pro Mini is now $1,495.00; a smaller version of the Ki Pro that makes it well suited for mounting on digital cameras and accessories. Also, ProRes 422 Quicktime files are captured directly from camera to CF cards (two slots enable switching from one card to the next). There is also support for SDI and HDMI cameras.

Nick Rashby, President, AJA Video Systems, says that the new lower price of the CION can't help but remove the barrier for entry by those producing indie and commercial film-making. Considering all that the CION and Ki Pro recorders offers, he could very well be right.