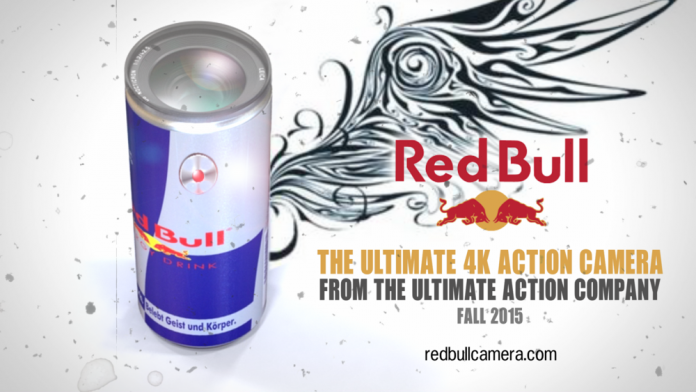 Energy drink powerhouse Red Bull has released an ad featuring what appears to be a 4K Action Camera (or a crude artist's rendition of one) in the shape of a Red Bull can. While the brand seems a natural fit for producing an action camera, this would mark a departure from their single product focused business model to this point.

As far as camera specs go, there isn't a lot to go on. Not much can be gleaned from the illustration aside from what appears to be Zeiss optics similar to that of a Zeiss Noctiron for Panasonic. The can shaped exterior of the camera is adorned with a single record button, which leads us to speculate that the bulk of the controls and connections are on what would be the bottom of the can, a la the Replay XD.

What isn't clear, is the size of the device. The perspective of the image suggests that the camera is potentially the size of a Red Bull can, which, if this proves true, could house some serious camera optics. This could finally spell a potential competitor to GoPro, where image quality is more important than diminuitive size.

Alternatively, this could follow in the footsteps of Contour, with a rotating lens and water-resistant housing, without the need for additional accessories. We can only assume that mounts would rely on clamping around the body of the camera, much in the way a microphone clip holds a microphone.

Since we're guessing about most of this, here is our Red Bull Action Camera wish list:

Well, that's what we know. We will be updating the story with any news that comes our way. Keep it locked to Videomaker.com!

UPDATE: The ad is no longer online. We have reached out to Red Bull, but have yet to receive a response.