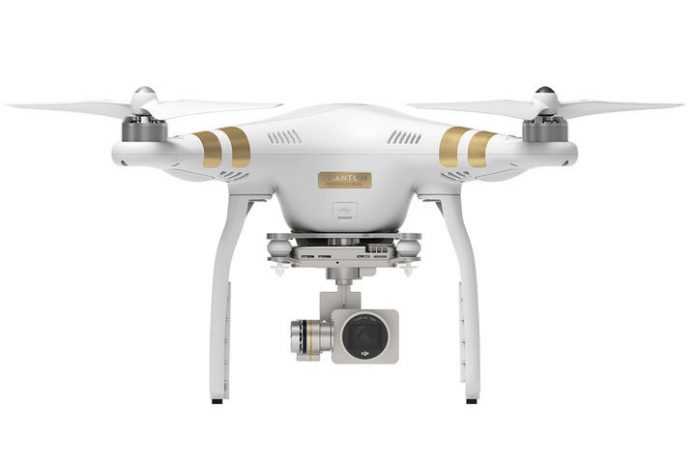 DJI made waves today by announcing the Phantom 3, the latest in their Phantom series of quadcopters. Improving on a success like the Phantom 2 can be a stunt, but it looks like DJI has done it.

Known for user-friendly UAVs, DJI’s Phantoms have been the consumer go-to, while their Inspire 1 is known to be the Cadillac of DJI drones. From the materials available, it appears that the Phantom 3 is going to elevate the Phantom status to truly pro-level, even though the price hasn’t increased.

To start, it has inherited the visual positioning system that delivers the incredible stability of the Inspire 1. This system truly makes the Phantom 3 the first pro drone that can be safely flown indoors. No GPS is required to keep the Phantom 3 stable. Gizmodo reported that “…the indoor flight is one feature I did see just yesterday in a tiny New York City hotel room. The drone floats perfectly still, and it almost feels safe even buzzing three feet away in close quarters. It’s astounding.”

The camera — in both it’s Professional and Advanced models — are amazing, and the Phantom 3’s configurability, easy learning curve and reasonable price make it a killer choice for new entrants to the aerial video game.

To start, the camera pretty much removes the need to shop for GoPros and custom gimbals. DJI’s camera matches the HERO4’s ability to shoot 4K at 30 frames per second (in the Professional model) and 1080p at 60 frames per second (in the Advanced model). The field of view is a usable — and wide enough — 94 degrees, and the image quality is excellent. The 4K camera is the same unit found on the Inspire 1, with the key difference being that it cannot be removed from the drone.

Along with the in-house camera, DJI developed their own sophisticated app for monitoring the footage you were shooting and allowing the shooter to adjust settings in real time.

Ok, let’s step back a bit. We keep mentioning the reasonable price. Let’s talk models and prices. The Phantom 3 comes in two models: Phantom 3 Professional and Phantom 3 Advanced. The aerial tools are differentiated by their cameras. As we mentioned earlier, the Professional version shoots 4K footage at 30 fps, while the Advanced shoots at 1920 x 1080 resolution at up to 60 fps. The Professional is the pricier unit, costing $1250, or $1350 packaged with an extra battery. The Advanced costs $1000 or $1100 with an extra battery. Battery life is rated at about 23 minutes of flight time. It should be noted that both of these are considerably cheaper than some of the hotrodded Phantom 2/GoPro combos that are flying today.

Like previous Phantoms, the Phantom 3’s flight and camera are controlled by an included remote controller paired with the fliers phone or tablet. The drone is controlled by the remote, and the phone/tablet app is used for monitoring and adjusting settings. Right now, the app is for iOS and a handful of Android devices, including the Galaxy family, Sony’s Xperia Z3, and some Nexus models including the 7 and 9. Expect that list to grow considerably.

Word is that DJI made some great advancements on how the system works for video downlink, with the controller now handling it, leaving the handset free to do things like livestreaming footage. Word is, that the downlink is far more reliable than the wi-fi that was used previously.

The Phantom 3 is available now through the DJI website.