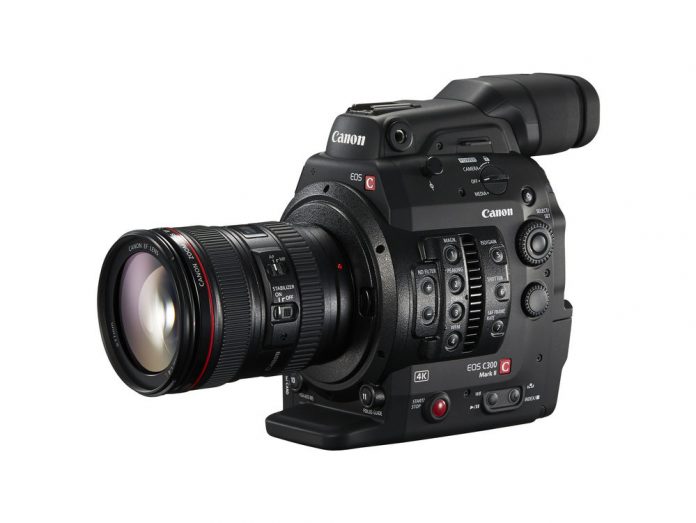 Dual sensors provide the processing power and speed for such feature improvements as 15 stops of dynamic range, bit rates of up to 410 Mbps, Canon Log Gamma 2 and simultaneous 4K and HD Proxy recording. 2K/FHD frames rates can reach up to 120 fps. There is 10-bit recording at 4:2:2 color sampling at all resolution settings, with 2K and Full HD resolutions support of 12-bit recording at 4:4:4 color sampling.[image:blog_post:56344]

The camera has a built-in microphone and hand grip, ISO support up to 102,400 and employs Face Detection AF with EF lenses as well as existing Canon stepping motor lenses. All this comes with a price — the suggested retail is $20,000.00 with either EF or PL mount. Availability is September 2015

4K 30p movie playback can be accomplished through the HDMI 1.4 output port. The camera can record in Canon Log Gamma, Wide DR or EOS Standard picture modes and can match looks with footage from other Cinema EOS camera systems. The 2.3 lb. camera has a built-in ND filter and microphone, ISO speeds of 160 to 20,000 and employs optical image stabilization (coming with a 10X wide-angle zoom lens plus 2X digital teleconverter). Continuous focus uses Face Detection while manual focus employs a dedicated focusing ring and a conveniently placed Push AF button. For still photography, shooting speeds can reach up to 3.8 fps. The variable angle capacitive touch-panel LCD monitor works in tandem with a rotating hand grip.

Dual-band wireless networks provide remote camera operations through a web browser or smartphone/tablet plus there is the ability to preview recorded images. The June 2015 launch will see an estimated retail price of $2,499.00

New also is the DP-V2410 4K Reference Display. Suitable for cinema production workflows and television broadcasting, the 24” 17:9 10-bit IPS panel has a 2000:1 contrast ratio, RGB LED backlighting system and anti-glare coating. Scheduled for a November 2015 release, the display's suggested retail will be $18,000.00.