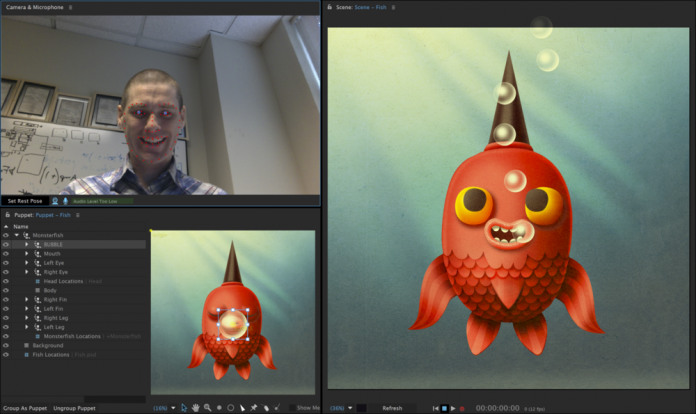 With NAB just around the corner, Adobe announced today forthcoming updates to the Creative Cloud for video professionals. The new updates appear to be quite innovative and increase the creative tools available for content creators. This includes several new tools, increased Creative Cloud integration and feature updates.

Speaking of color, Premiere Pro also features a new color workspace with new coloring tools, allowing editors to begin playing with different looks and styles from the very beginning of an edit.

A new tool inside of Premiere Pro will be Morph Cut, which takes advantage of face tracking and frame interpolation to smooth over jump cuts in talking-head shots.

The new Face Tracker will provide detailed tracks of a subject’s face. This information can be used in a variety of ways, from compositing visual effects to touching up the talent’s appearance. The Face Tracker information can also be shared with a new desktop application in Adobe Creative Cloud, Adobe Character Animator.

Adobe Character Animator will allow users to animate 2D characters with face tracking, audio analysis, and trigger expressions. A user only needs to build their character then use a webcam, microphone and their keyboard to bring their creation to life. Physics-based particles in Character Animator will allow the user to create life-like animations.

Adobe Creative Cloud hosts not only a wide range of desktop applications, but mobile apps as well. Project “Candy” is a new mobile app that allows users to capture creative inspiration through their mobile device. “Candy” interprets the color from a captured image and the user can then manipulate that color profile and save it as a look. These looks can be shared through Creative Cloud Libraries and applied as a drag-and-drop color profile onto footage in both Premiere Pro and After Effects.

There are upcoming upgrades to all the video apps in Adobe Creative Cloud, including Prelude, Audition, Media Encoder, and Speedgrade. Adobe recognizes the need for video professionals to have an open workflow that allows them to be creative in all phases of production and is serving that need in the direction of their product development.