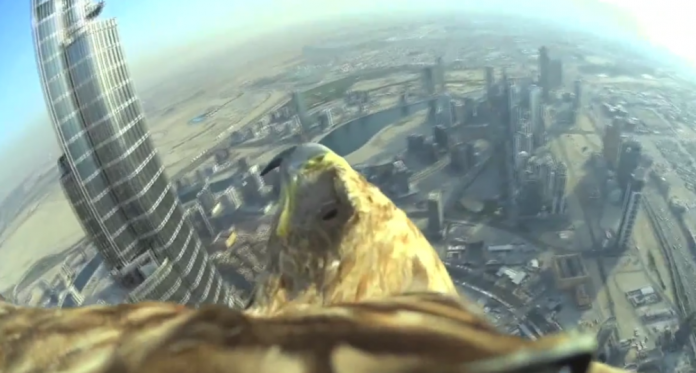 Bird’s eye view is a common term in our industry, but rarely do we get a literal bird’s eye view of something so spectacular as this. A white-tailed eagle named Darshan made an epic flight from the top of the Burj Khalifa in Dubai.

The flight takes viewers on the 2,722 foot descent from the very top of the world’s tallest building on the back of the massive bird, it’s alert head looking about and guiding the bird in the foreground of the shot. It was the highest recorded bird flight from a man-made structure ever, and was broadcast live on BBC News.[image:blog_post:56125]

The capture was courtesy of a Sony Action Cam Mini mounted to the eagle’s back. The camera, while tiny, still weighs about 300 grams once housed and mounted, which definitively highlights the strength of the amazing falcon.

The flight, organized by Freedom Conservation, was an effort to raise awareness for endangered birds of prey and encourage conservation. This isn’t their first landmark flight. Past flights have included the Eiffel Tower in Paris and St. Paul’s Cathedral in London.

"We know that people love these types of videos. It's a great way for us to attract the public's attention to endangered animals and to the fact that humans need to learn how to share their space with these animals," Freedom Conservation Director Ronald Menzel told NBC News.

Menzel didn’t work alone on the project. His work with birds of prey over the years caught the attention of the Crown Prince of Dubai, who invited the French conservationist to Dubai to help raise awareness of the need for protection for urban wildlife. Menzel told NBC News that over the course of four months, the Freedom Conservation team worked with the prince's technology team and Sony to get the camera and transmitter setup figured out for Darshan's flight.

“Darshan is a male Imperial Eagle with a wingspan of two metres,” said the bird’s trainer and founder of Freedom Conservation, Jazques-Olivier Travers. “He is a very powerful bird, which is necessary as he is donning a 300g camera on his back.”

Darshan is in good hands with Travers, a pioneer in endangered species techniques for reintroduction into the wild. His techniques include paragliding, skiing and kayaking with the birds to teach them survival skills. He also runs a Haute Savoie, France, bird park with about 150 birds of prey there. He founded the Freedom Conservation group in 2006.