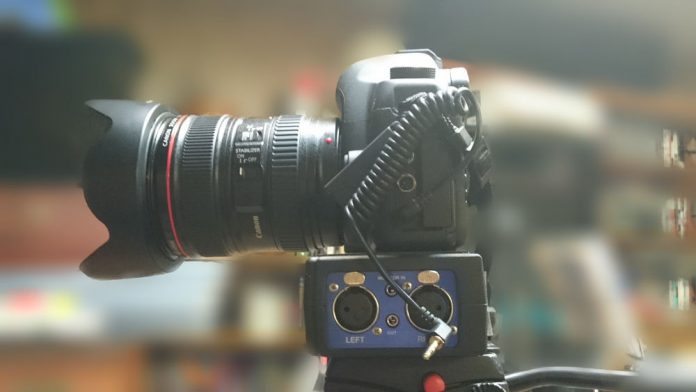 Getting back into the swing of work after a long weekend usually involves copious amounts of caffeine, a long negotiation with oneself to extricate from bed and get rolling, and a flood of stress whooshing back into the picture as the week we just shook off comes back to haunt us. Shooting after one of these extended breaks can be both a nice way to get back in action and a test of our ability to get reorganized and reintegrate with the professional world.

So, what happens when a brain doesn’t quite want to kick back into gear with a post-long weekend shoot? Bad things. Very, very bad things.

A short time ago, at a client site not that far away…

Here is the story of what had the potential to be this writer’s most difficult and embarrassing day back to work. It all started with a wonderful long weekend.

*** While I would love to say this story took place many years ago, long before I became a video professional, it didn’t. It happened last fall. Sorry — back to the story. ***

A friend’s wedding took place on the Saturday of an unusually warm weekend. Lots of fun and frivolity was enjoyed by all in attendance, and the next couple of days off were filled with brunches, lunches, and pub nights to celebrate the nuptials. The weekend was a joy, certainly putting the reality of Tuesday’s shoot far off into the depths of my brain. It would be fine. I knew what I was doing.

Well, Tuesday morning rolled around and it was time to come back to Earth and load up for the shoot. With all of the excitement of the weekend, I was running a few minutes late, but there was plenty of setup time, so I skipped breakfast and was quickly back on track.

The shoot was for a public service announcement helping bicyclists to operate around traffic on the road, and vice versa. An expert was to speak live on camera and interact with a cartoon version of himself, which I was filming, converting to cartoon form and adding in during post. I had done some similar projects in the past, and this one was shaping up to be really fun.

A set was put together out in the cordoned off parking lot and a second set was fashioned in a large classroom facility inside their building. The indoor set consisted of a large portable greenscreen, clamped tight to Cameron background stands, lit for key and fill with a couple of large Westcott fluorescent Spiderlites with softboxes, a Lowel Omni-Light across the room for general scene light, and a Lowel Pro-Light to work as a hair light.

Outdoors we had a very simple setup. A beautiful sunny day, and a reflector.

Though I had another body on set to assist with camera operation while I directed and fussed over the lights and talent, it was my job prior to shooting to prep every piece of gear and perform tests to ensure everything was working as it should. Having run a few minutes late, I tested everything. At least, I’m pretty sure I tested everything. I mean, it all looked right, so that’s good, right?

Woozy from skipping breakfast and too much coffee I put my head down and got to work.

As expected, the shoot happened on time whether I was ready or not. I wasn’t feeling great by this point so I skipped my usual final checkup —  the one where I shoot a few clips in each environment with my talent speaking to ensure audio and video were as good as they should be. Sure that it would be fine, and reluctant to make the client wait, we got shooting.

Starting outdoors, we enjoyed the benefits of a sunny day. That big 5D sensor gobbled up the sunlight and returned beautiful imagery. Even on the Canon’s tiny screen it was easy to see that our footage was going to be perfect, and a quick playback of a clip proved our audio was indeed captured and was bright and clear.

Between indoor and outdoor shoots, the crew, client and talent broke for lunch. Wanting to check some emails, double check lighting, and get off my feet, I opted to stay and prep for their return. I was hungry, but I would feel better knowing that the set was perfect for the afternoon.

Moving indoors our talent was getting more comfortable on camera and we jumped right into capturing our greenscreen shots. Refuelled from a good lunch, his delivery was clear and crisp. Audio from the awesome G3 came through the Beachtek adapter loud and clear. Even the cameras worked better than imagined. While the 5D isn’t the best tool for greenscreen work, we were taking the subject, keying out the background, then using After Effects’ native Cartoon effect to turn our character into a cartoon. I wasn’t worried about color depth, compression — heck, I wasn’t even that worried about focus — we just had to turn the guy on the screen into a cartoon.

We packed the bulk of the gear up, just leaving cameras on tripods off to the side while we did a bit of “just in case” work. With differing conditions inside and outside of the building there was a bit of concern that audio wouldn’t match up very well. We used foam over the microphone while outside to keep wind noise down, but it would be natural for the talent to speak differently when in the noisier outdoor environment. With a script of only about 20 lines of dialogue, it was decided to have the talent perform his live action and cartoon parts into a great Blue Yeti Pro USB condenser microphone into Adobe Audition on a MacBook Pro. It was a precautionary measure, but heck, extra measures are always welcome when back at the editing desk, as I would soon find out.

By dinner time we had wrapped everything. New audio was captured, our shot lists had been entirely checked off. The client and talent were enjoying that post-shoot euphoria that often occurs when they’re sure that we just nailed something.

For me, it was time to finish packing and get home. After all I hadn’t eaten yet, and enjoy being head chef at home. I had about an hour before the dogs needed to be walked and dinner should be on the table.

Packing up the cameras and tripods I noticed something —the cable connecting the camera we used indoors to it’s Beachtek adapter was connected only to the camera. The other end of the coiled cable dangled lazily about an inch from where it should be connected. Hmm…that could be a problem. The Canon 5D Mark II has no audio monitoring capabilities, and so we monitor audio directly from the adapter. If the adapter wasn’t outputting to the 5D’s audio input there would be no way of knowing without physically looking.

Having one hungry foot out the door, I figured that we probably partially tore down the camera when moving it to the side of the room following the shoot. Into the bag it went, and off I headed.

As it turned out, the cable was never connected. My heart sank as I reviewed footage and heard only the distinct sound of the Canon’s internal microphone capturing the scenes. I could hear the camera operator breathing and fidgeting over the audio of the talent. The steady ticking of the camera writing the file to CF card was clearly audible. The din of a large room was completely obvious.

I was ruined. The talent lived a couple of hours out of town, and the client had little patience for oversights on the part of their contractors.

As I usually do, I started putting together the pieces I had and attack the footage that could break the project. After Effects work is one of my true joys, and I gravitated toward the parts I knew would work. I used Keylight to key out the greenscreen, and added the Cartoon effect to my subject. Tweaking the effect gave me a black and white cartoon outline of the actor, with only his major features standing out.

Compositing the keyed footage over the outdoor shots was a breeze. Planning and experience made putting the pieces together simple. Unfortunately, experience also told me I had real trouble on my hands with that terrible audio on the cartoon clips.

Upon closer examination, the cartoon version of our actor had the right look, but part of that look was less definition of much of their fine features, and only the really big stuff – glasses, helmet, bike, etc. – really stood out. This would play into my favor: Taking the audio we recorded at the end of the day as a precaution, I dubbed all of the cartoon actor’s lines over, save for the very last one, which we must have overlooked in our rush to get finished for the day. With the lack of clear definition it was easy to sell the ADR audio as the cartoon voice.

After delivering the video to the client via Wipster, I awaited revisions and crossed my fingers.

A short time later the client logged into the review and approval site and watched the video. 15 minutes passed. Then 30 minutes. It was agonizing.

After an hour a single annotation appeared over the video: “Looks great — fix the audio on the last clip.”

So there it was. A tired, starved, and rushed post-long weekend shoot ended with an explanation about an unhooked audio adapter, a full day of audio tweaking to try to clean up the straight 5D audio on a three second clip, a promise to try harder the next time, and a large glass of red wine.

Lesson for myself? Eat meals, take breaks, don't skip anything. Shoot days get complicated with lists and double checks, but it's for great reason, and the complexity of the procedure is still far simpler than trying to fix something that was overlooked or done incorrectly.

Here’s hoping your re-entry into a short work week goes a bit more smoothly than mine did that week.

Got any horror stories from shoots? Share them in the comments or hit us up on Twitter @Videomaker!