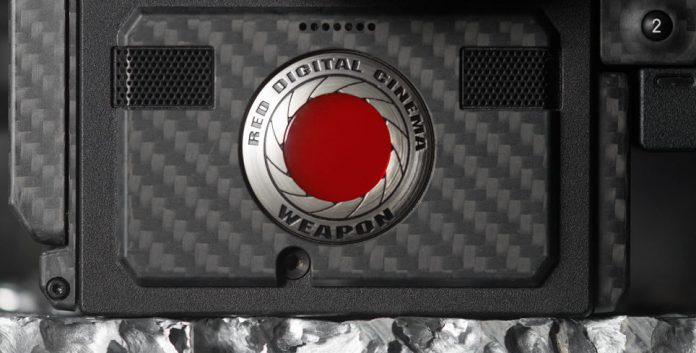 High end camera manufacturer, RED, has announced a camera body upgrade for all DRAGON sensor-equipped cameras called WEAPON. WEAPON is a paid upgrade to be officially unveiled at NAB 2015.

While details are scarce, it is speculated that the new WEAPON body will take better advantage of the awesome DRAGON sensor and add some space for upgraded electronics. Beyond that, it is anyone’s guess what the changes will be.

The upgrade is for both the EPIC DRAGON and the SCARLET DRAGON.

Here is a bit of what Jarred Land of RED was saying on reduser.net:

“For everyone with a Dragon… NAB is gonna be awesome.

For everyone that hasn't upgraded yet…. you are best to get that done before the show.

It will be worth it.”

For those who have paid for the upgrade but haven’t had it done yet:

“Its ok.. as long as you paid you will be included in the chaos even if you havn't actually upgraded yet. Just make sure you keep your bombsquad rep in the loop on your timing as the Dragon upgrade lines will be shutting down and switching over to Weapon mid summer.“

On the subject of how they could possibly improve on the existing awesomeness:

On the paid upgrade, and being a DRAGON owner prior to NAB:

“Yes… you need to own a Dragon to upgrade to Weapon. As long as you are a Dragon owner before NAB, you will get a nice chunk of change back to continue along the journey.”

And on the finality of the upgrade line changeover:

“I am trying to give you that heads up.. Come summer our MX to Dragon upgrade line changes over so the old process logistically needs to end. Sorry man…I know it is a tricky situation. We just can't keep running all upgrade lines forever.

Adult Supervision is gonna kill me for talking so much about Weapon two whole months before NAB… But apart from my incredible lack of ability to continue to keep this bottled up from excitement, letting you know the auxiliary effects the new has on the old is one of the biggest reasons why it is important to share with you a bit of info tonight…. So you guys have enough runway to sort things out. “

And about eligibility and the preference for Carbon models:

“…if you upgraded or upgrade your Epic M/X to Dragon before NAB you are eligible. Carbon Dragons get pole position just like last time.“

There’s more to the thread, which can be found HERE.