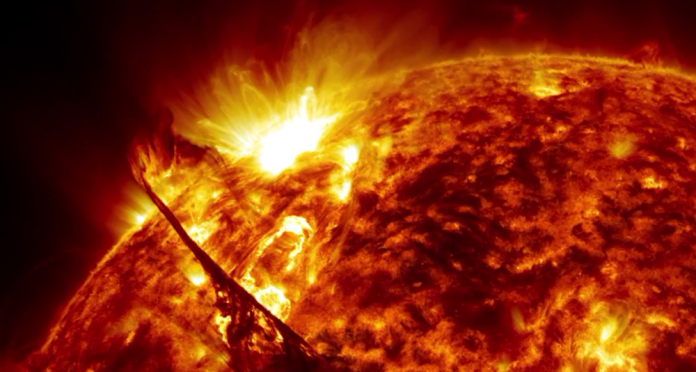 Tired of the hurry up and wait of time-lapse shooting? Unhappy with the huge files your 4K workflow is producing? Well, imagine this shoot: 1,826 days, 2,600 Terabytes of data, 200 million images, and the shoot location? Space.

In celebration of it’s fifth anniversary, NASA’s Solar Dynamics Observatory (SDO) has released a video showing off five years of sun watching. The video shows images of unprecedented clarity, including detailed looks at massive explosions, clouds of solar material blasting out into space, giant loops hovering in the corona of the burning orb and sunspots growing and shrinking on the surface.

Built, operated and managed by Goddard, the SDO spacecraft is part of NASA’s Science Mission Directorate, a project with the goal of developing the scientific understanding necessary to, as NASA Goddard’s YouTube channel puts it, “address the aspects of the sun-Earth system that directly affect our lives and society.”

The video, while breathtaking, is a great look at how valuable operations such as SDO are to scientists. Nowhere else is this kind of data collection possible, and the value this provides to NASA is huge. To provide this data, SDO gathers data every 12 seconds, which calls for a 130Mbit connection to transmit 1.5TB of information back to Earth every day. Beyond simply looking beautiful, this data can help scientists predict solar flares and other occurences which may cause disturbances back here on Earth.

For those who wish to grab a copy of the amazing video for keeps, it is public domain and can be downloaded at: http://svs.gsfc.nasa.gov/goto?11742

So are we! Let us know what you think of this incredible project in the comments or on Twitter @Videomaker