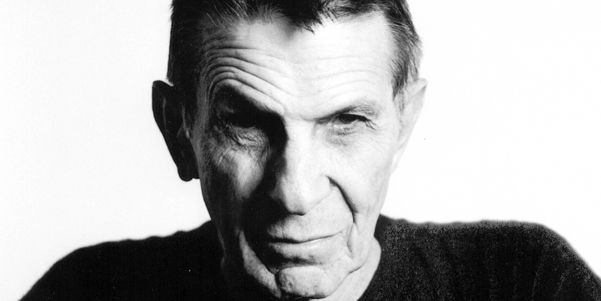 The galaxy will never be the same. Leonard Nimoy died this morning in Bel Air, California, at the age of 83. Nimoy was known primarily for his portrayal of Spock in the television series Star Trek.

To those unfamiliar with the series, Spock was a half-human, half-Vulcan, highly logical science officer aboard Star Trek’s fictional Starship Enterprise. The character provided a highly logical, completely controlled counterpoint to William Shatner’s fast and loose Captain Kirk. Though the series was only on the air for three years, it sparked a fandom with few rivals, and eventually spawned a series of successful movies featuring the same characters and many of the same actors.

Born Leonard Simon Nimoy on March 26, 1931 in Boston. He was raised by his parents, both Russian immigrants, in an Orthodox Jewish family.

Nimoy’s upbringing played into his portrayal of Spock, as he was able to incorporate some of his religious heritage. The hand gesture accompanying the phrase “Live long and prosper.” was adopted from a blessing given by a Jewish priestly class called the kohanim. Nimoy gave credit to writer Theodore Sturgeon for the exact phrase "Live long and prosper,” which was a variation of a spoken blessing.

Nimoy’s career went beyond Star Trek, with a busy schedule over six decades of acting on screen or stage. He had success as a director as well as actor, and even directed a true Hollywood hit with “Three Men and a Baby” in 1987. Outside of the movie and television scene, Nimoy was known to be an accomplished photographer and a published poet. He also had a brief stint trying his hand at singing.

But Spock will be the legacy he leaves most of us. His character’s logic-driven, straight-edged personality was so interesting, endearing and likeable in a way that defied logic. His pragmatism not only kept other characters in check, but was so matter of fact it provided many comedic moments. Rarely does a character portrayal become an enduring, beloved, iconic figure to the extent Nimoy’s Spock did, truly creating a synonymity between actor and character.

The legacy of the series lives on today in the rebooted movies series, with the character of Spock portrayed with great reverence to Nimoy by the talented Zachary Quinto. Upon hearing of the death of his friend, Quinto tweeted: “My heart is broken. I love you profoundly my dear friend. And I will miss you everyday.”

Original castmates William Shatner and George Takei also tweeted their respects, as did millions of others.

Though he struggled with typecasting, and this article focuses on the facet of Nimoy’s life we’re most familiar with, he likely would have approved. Nimoy always felt a close connection with the character of Spock, not only loving the opportunity to portray him, but there was more.

"I am not Spock," Nimoy once wrote. "But given the choice, if I had to be someone else, I would be Spock. If someone said, 'You can have the choice of being any other TV character ever played,' I would choose Spock. I like him. I admire him. I respect him."

According to his granddaughter, Madeleine Nimoy, the cause of death was chronic obstructive pulmonary disease.

His life, gift and legacy will surely live on.