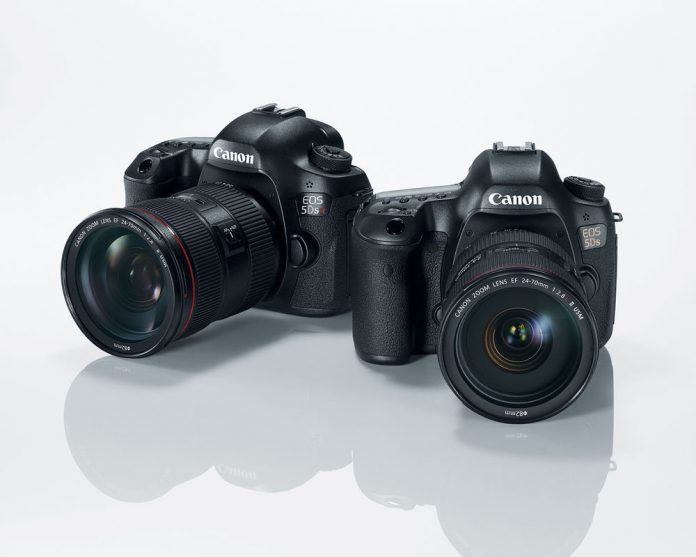 Canon rolled out a series of announcements this morning, including updates to their flagship EOS series, all new Rebels, a couple of new PowersShots, a tease of an upcoming point and shoot, and some new top end glass. Of particular interest were the release of new 5DS and 5DS R model DSLRs.

While the cameras are close to identical, the low-pass filter effect in the top end EOS 5DS R model is cancelled to optimize each pixel to help deliver sharper images. This is a first in an EOS camera.[image:blog_post:55686]

While video and still shooters alike will enjoy advantages of the upgraded innards of the 5DS series, at this resolution and with the variety of high end Canon lenses, Canon’s full frame flagships now truly provide a lower cost alternative to medium format still cameras.

With resolution as crazy as the 5DS and 5DS R, and with any DSLR for that matter, camera and mirror shake can be an issue. For the new EOS line Canon has reinforced the chassis, baseplate and tripod lug to improve rigidity, as well as redesigned the mirror vibration control system to cut back on mirror bounce and camera shake. If that doesn’t cut it, the new Arbitrary Release Time Lag Setting in Mirror Lock mode will augment the standard setting (press the shutter button once to lock the mirror, and again to release the shutter) with new intervals of 1/8, 1/4, 1/2, one and two seconds, releasing the shutter after the selected preset delay, allowing potential camera shake to stop before the shot is taken.[image:blog_post:55687]

“Canon is always looking to deliver the absolute best in image quality and push our technology to the limits. These cameras deliver on that pledge, providing photographers with two new incredible tools that will enable them to make the most out of every shoot,” said Yuichi Ishizuka, president and COO, Canon U.S.A., Inc. “As photography becomes more specialized and more images are captured than ever before, the burden is on the photography equipment to keep up with the demands of today’s artistic talents. These new camera models will provide many photographers with new options to deliver their vision to clients, fans, and the world.”

So we’ve established that they’re great cameras. True upgrades over previous EOS models. So why on Earth have we made a recommendation to skip the 5DS and 5DS R as movie shooters?

These full frame shooters haven’t made the jump to 4K. In fact, they aren’t shooting even 1080p at frame rates greater than 30 frames per second. For shooting 60 fps, operators will be forced to set the camera to 720p. With the direction the video industry is moving, this seems like a bit of a misstep for Canon.

Actually, overall it probably isn’t a misstep. The frame size issue is just one of many areas where Canon has decided to take the 5DS series out of contention for video production. Truthfully, it was probably our expectations that put it in contention in the first place. Canon never really made a conscious decision to lead the DSLR video charge.

The first video-enabled DSLR was Nikon’s D90, capable of shooting 720p with mono sound. Hardly enviable, considering what was already available at the time in camcorder tech. It wasn’t until Canon gave Vincent Laforet a 5D Mark II to play with that the capabilities of a DSLR for serious film work ever really came up. For those who don't know the story, Canon gave Laforet the body and some glass to test out the video capabilities of their new camera, the 5D Mark II, and he took it and shot Reverie, the world’s first 1080p DSLR-shot video. Still beautiful by any standard, his use of the large sensor for depth of field and creamy bokeh proved the Canon for video work. Future use of the cameras for projects like episodes of House and the feature film Act of Valor  further solidified the Mark II in the hearts and minds of filmmakers around the world.

The Canon 5D Mark II set a standard for us in an area we didn’t know a standard needed to be set. A still camera took advantage of a large sensor and made a video image the world hadn’t seen in cameras at consumer-accessible prices.

What we’re seeing is Canon continuing to make extremely high end still cameras, and a video industry looking to a still camera to do something it was never expressly intended to do. At the risk of breaking thousands of DSLR-enthusiasts’ hearts, the 5DS and 5DS R aren’t built for us.

As for these two, they’re not a total pass. Some other cool features, such as the time-lapse mode which combines time-lapse stills into a movie file, and fast still shot shooting of up to 5 fps really do round out a couple of great cameras, but without some changes, it is tough to recommend the 5DS and 5DS R’s $3,699 and $3,899 bodies, respectively.

That being said, put one of these in Laforet's hands, and I'm sure a nice video will still come out the other end.

For those looking for more information about the new cameras, check out usa.canon.com/eos.

Are you going to try out the new EOS DSLRs? Would you replace a 5D Mark III with one of them? Let us know in the comments or hit us up on Twitter @videomaker