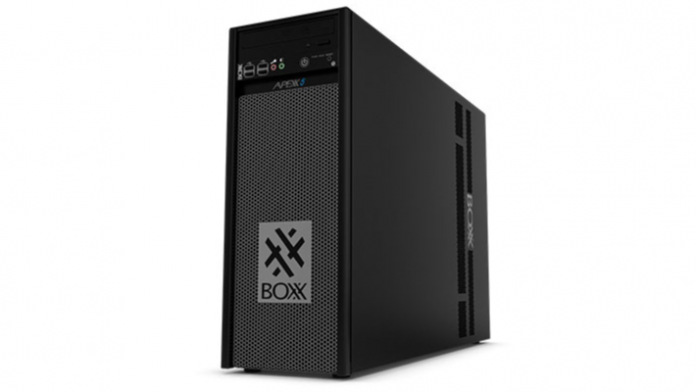 Roll your Mac Pro under the bed. Cover your HP Z840’s eyes. There’s a new monster workstation on the block, and it’s specs are crazy.

Enter the Boxx Apexx 5, the latest in Boxx’s lineup of powerful desktop computers for hardcore production work. Boxx is touting the Apexx 5 as the "world's most advanced computer workstation.”

Configurable with up to two Intel XEON processors with for a total of 36 cores (72 threads) and up to 5 GPUs, the liquid-cooled Apexx 5 certainly has the start of a monster machine. That impressive thread count is thanks to a couple of 18-core, liquid-cooled Xeon 2699V3 chips. The Haswell-based CPUs have clock speeds of 2.3GHz to 3.6GHz.

The Apexx 5 can support up to 512 GB (!) of registered DDR4/2133 memory, and totes enough internal real estate for up to four dual slot GPUs, such as  the Nvidia Quadro K6000, NVIDEO Tesla, Intel Xeon Phi, or AMD FirePro W9100 cards. If that isn’t enough, how about installing a separate fifth GPU to manage displays and save the four other GPUs to crank out renders? Worried about running out of slots? Boxx says this five GPU configuration will still leave room for a 10Gb Ethernet card and a PCIe SSD drive.

So here’s the million dollar question: what does something like this cost? Well, not quite a million.

Well, it’s safe to assume that most home video enthusiasts won’t require the kind of horsepower the Apexx 5 offers. This is a true, professional, studio workstation, and it is priced as such.

The online configuration tool can help you ramp up the cost to a cool $58,000 or so, and if that isn't spendy enough, a call to Boxx's sales department can be made for custom configurations not available through the site.

While the Apexx 5 isn’t for everyone, those who truly need this kind of power will be very happy that it exists.

Sidenote: This writer was fortunate enough to experience the power of a Boxx workstation first hand at a User Group meeting last month, where one of Toronto’s top VFX artists showed us what the machine is capable of. All I can say, and speaking as a diehard Mac fan, is that for wildly intense After Effects work the performance of these machines does not take a back seat to any workstations I’ve come across.