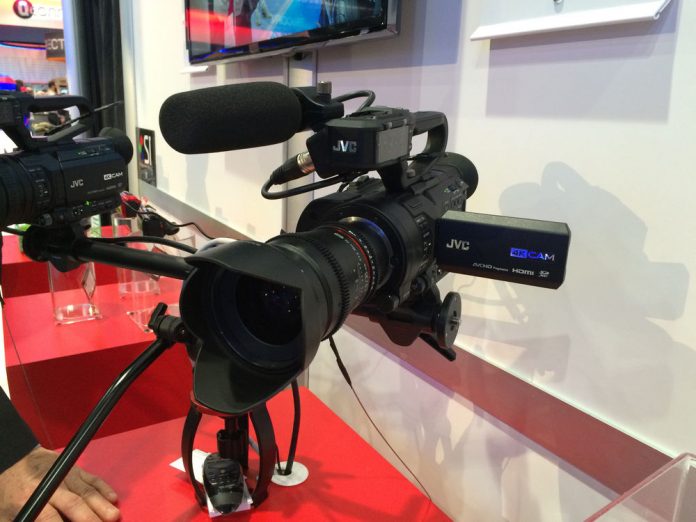 The JVC GY-LS300 and GY-HM200 are at CES 2015, so we’ll keep this short and punchy. In case you missed our post about them, read up. Our photos from the CES floor give our editor's perspective. We’ll start at the top, the GY-LS300 brings 4K resolution with 4:2:2 sampling and proxy formats. The Super35 sensor can electronically adapt the active area to work with lenses beyond it’s own Micro Four Thirds size. Using third-party adapters should be as easy as it gets. The GY-LS300 comes in during March 2015 at $4,450.

JVC’s GY-HM200 and GY-LS300 aim to make streaming video easy. When’s the last time you found camera doing the streaming? The GY-HM200 has its lens integrated with 12x optical zoom and can record to SDHC/SDXC cards at the same time. Using the ProHD Broadcaster server and Zixi’s Advanced Streaming Technology allows content-aware correction, and one of the handiest perks is the Streamconfidence that shows your streaming status in the viewfinder. Both use dual XLR inputs with built-in phantom power, and since a stream is coming from a single source, our theory is that there’s fewer instances of latency with the video. The JVC GY-HM200 costs $2,995 and will be available a month earlier, in February.