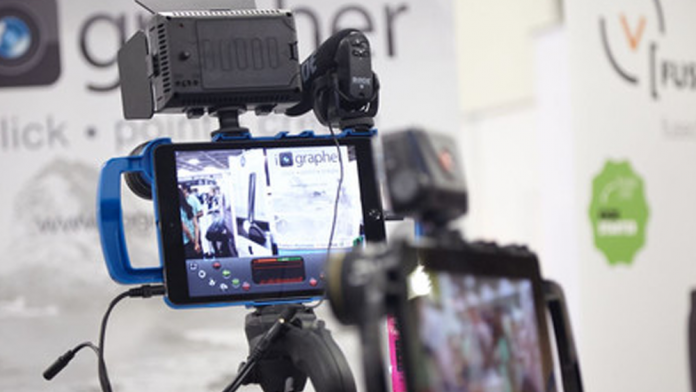 We here at Videomaker love making video. Whether it’s made using a tablet or a Phantom Flex4K, the trade, craft and hobby of producing moving pictures is our bag. While we are occasionally in a unique position to try cameras that are astronomically priced and wildly capable, most of us aren’t in a position to own or even shoot regularly with those superstars. So how would we spend our money if we had exactly a thousand bucks to drop on a shooting setup? Let’s take a look at five dream setups that stretch what’s possible with a buck.

All of these setups are going to capture footage, but this one can capture shots like none other. Start out with a 3D Robotics IRIS+ personal drone — a $750 quad copter capable of following any Android device with GPS without any input from an operator, or follow an auto-piloted path drawn over a map on an Android tablet. At this price point we’ll have to forgo the $210 gimbal for GoPro, but out of the box the IRIS+ has a vibration dampened GoPro mount. So we’re left with $250. Fortunately, GoPro released the bargain GoPro HERO, a $129 1080p action camera in a rugged waterproof casing. That leaves us a cool $121 for extra batteries, a Micro SD card, or some extra arms and legs for the IRIS+ in case it has a rough landing or two. Or for a bottle of champagne for celebrating the crazy aerial footage that this rig can generate.

Web blogs, vlogs, web shows, and YouTube shows are growing. Homegrown video production is exploding right now. Car dealerships can shoot their own web commercials, home cooks can have better viewerships than Food Network shows, and YouTube has been a better hotbed for new vocal talent than American Idol, The Voice and X Factor combined. The age of DIY video is upon us, and there are killer tools for home production. For our setup, let’s start with an original generation iPad mini. Still available from the Apple Store, these production powerhouses clock in at $249. Add shooting app Filmic Pro for another nine bucks. Then encase that iPad in an iOgrapher for iPad Mini for $39.99. That leaves us $700. Let’s add a 37mm wide angle and telephoto lens for iOgrapher for $29.95 a piece, a RØDE VideoMic GO for $95, and a Manfrotto ML240 LED light for another $80. While the iOgrapher is great handheld, there are tons of options to add a small Manfrotto tripod, a handful of production apps, or even upgrade the iPad to an Air for a better camera. Brace yourself, YouTube. Vloggers incoming.

Action cameras and iPads are fine and dandy, but what if we want to shoot something epic and we need that cinematic depth of field and buttery bokeh. It’s time for a bigger sensor, some lens options and some manual controls. $725 will get us into a Canon T5i and a 50mm 1.8 fast prime lens OR a Nikon D3200 with Nikon’s equivalent lens. Both of these bargain beauties have killer APS-C sensors, and are capable of beautiful footage. That leaves a cool $275 to add production value with a nice slider from Glide Gear. Heck, luck into a sale and a handy device like Manfrotto’s Fig Rig could replace the slider.

All of the above setups are cool, but sometimes a true camcorder is the most efficient way to shoot. For just shy of $700 the Panasonic HC-W850 Twin Camera will capture two camera angles at once, offers 5-axis optical image stabilization, and can shoot true slow motion at 120 frames per second. With the leftover cash, something like a $200 Sennheiser MD 46 Cardioid Handheld Dynamic ENG Microphone would make interviews on the road sound like a setup costing thousands more.

Stripping down to the lightest possible package is appealing for a number of applications. The Sony a6000 is a mirrorless camera that captures insane footage and weighs next to nothing. Coupled with a 16-50mm lens, the a6000 clocks in at around $700. The technology crammed into this little beast is pretty amazing. The Fast Hybrid autofocus system has a 179-point phase-detection system and 25-point contrast-detection system to ensure precise focus in just 0.06 seconds. It can also shoot 1080p at 60 frames per second. With that leftover $300, we can add production value with a Varavon TILT JIB T1 — a 3.3 ft mini jib, designed to take ordinary shoots and add some lift. For a few bucks more, there are options from Genustech and Ikan, but all achieve the same killer effect.

So there it is. Five cool setups that will take your money and give you some real value in return. There are so many inexpensive options in the market now there is only one thing we can say: it is truly the most exciting time in history to be in video.

Have any other cool sub-$1,000 setups that we missed here? Let us know in the comments or hit us up on Twitter @Videomaker!

On another note, just before the end of the year we gave a list of some of this writer’s favorite cameras of 2014. In that list there was one obvious omission; the Panasonic GH4. Believe me, I heard about that one loud and clear. The truth is, the GH4 is such a wonderful, capable camera that it seemed as though it had been in pro’s hands for much longer than the ten months of 2014 that it had been around by the time the post was written. An oversight, for certain, and my mistake.

There we have it. Record set straight.