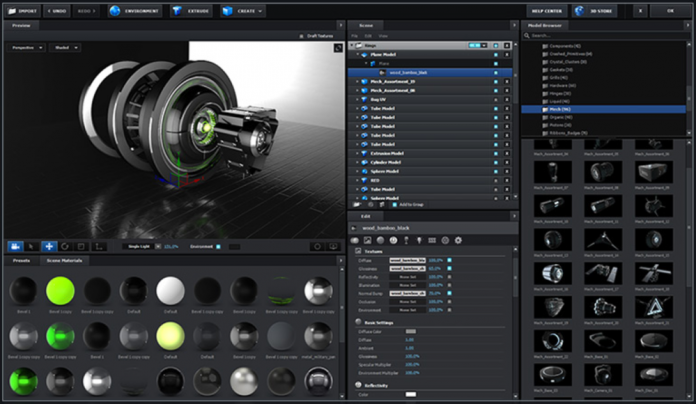 Effects powerhouse Video Copilot has released the second generation of their hugely popular Element 3D plug-in for After Effects. E3D V2 brings about sweeping changes to the plug-in, adding another level of realism and flexibility to 3D object and particle system rendering.

As with V1, Element 3D can still import 3D objects as C4D or OBJ formats, animation OBJ sequences, and 3D textures as PNG, HDR, JPG, or EXR. New for V2, Element 3D has automatic texture importing, as OBJ with MTL and C4D files.

As with any Video Copilot release, Element 3D V2 has to kick things up a notch beyond simple file compatibility. New for this release is the addition of soft shadows and ambient occlusion (SSAO), both of which add a layer of depth and realism through realistic shadowing on and around objects.

The shadows and occlusion work in a couple of ways. If speed is the name of the game, E3D V2 can produce OpenGL Shadows and has improved SSAO. If quality is critical, the plug-in can also put ray tracing to work for shadows and ambient occlusion. Plenty of options to get those projects looking awesome. http://youtu.be/P3BKw9jK-kI

For those looking to amp up titles and add 3D goodness to mask shapes, Element 3D V2 has powerful bevel and extrude features. There are options to animate individual characters, add multiple bevels per object, and if that text isn't going to plan, there are built-in bevel presets to apply ready-made. Also, new for V2 is the ability to create a bevel outline, which extrudes from shape edges to create cool outlined text.

Dynamic reflection maps adding a layer of realism with realistic reflections, and a clean and intuitive new interface combine to round out a powerful new tool any motion graphic designer or 3D enthusiast will need to consider for their visual effect toolkit.

Element 3D V2 is available now for $199 on the Video Copilot website.

Have you had a chance to try Element 3D V2? Share your projects! Drop a link in the comments below or hit us up on Twitter @Videomaker